Amir Khan has done it again.

After reading reviews from Reema and Harsh, taking opinions on Facebook, coming across tweets declaring the movie to be the biggest blockbuster of 2009, I finally decided to watch "3 idiots".

Not being a movie buff, I wasn't all that interested initially. I usually wait for movies to air on TV, or I just borrow them from friends and watch them at home on my computer. My opinions on movies usually differ from the masses. Just once, I had gone for "Jaane Tu Ya Jaane Na" after people telling me it's "simply awesome" and was hugely disappointed. This time though, since I had read the book (which, by the way, is not like the movie at all), and since Amir Khan was starring in it, I decided to take a chance. One of my friends even told me I'd get an answer to what I want from life if I watch the movie. I wondered how a movie could determine my life but, nevertheless, decided to catch this one.

Aditi and I had been making plans but putting them off everyday because neither of us could get up in time for the 11:30 a.m. show and couldn't really afford the late evening shows; they went "House Full" anyway. Today, however, we were determined to watch it.

We went to the first theatre in Dadar and found that all the shows were booked  and the booking office would open only at 4, and we'd have to book in advance. We decided to go to to the next closest theatre, which we had always thought was totally sad because of the "crowd" that most people said it attracted. There was a saree-clad aunty standing outside saying "100 mein le lo.. 100 mein le lo". We assumed that the show was House Full here too. The security guard at the gate let us in easily but as we had guessed, we found the booking office closed. We asked him when it would open and he replied, "Madam house full hai sab shows (All shows are House Full)". So, we turned to go back, and he stopped us asking us how many tickets we wanted. We promptly replied, "Do (two)". He said, "Side mein khade raho (Stand at the side)". We wondered if he was involved with the aunty outside who was selling those tickets illegally. A man in a maroon formal shirt came towards us saying, "Kitna chahiye? Do na? Aao mere saath (how many? two right? Come with me.)". We got scared. I nudged Aditi saying, "Abbe yeh black mein de raha hai shayad.. aaj tak kabhi black mein nahi khareeda re, kya karna hai.. (I think he is selling them illegally, what do you think we should do?)". We followed him slowly and silently still re-considering buying tickets from him. After about two minutes, as if he had read our minds, he said, "Arre darte kyun ho itna! Same rate mein de raha hu booking office se hi!! (Why are you so scared? I'm selling them at the same rate from the booking office itself!)". We chuckled. He was just leading us to the back entrance of the booking office where he worked and gave us two balcony seats at the same rate. He added, "Special seats hai. Milta nahi hai (They are special seats. You don't get them so easily)". We wondered why he was being so nice to us, but were happy that we bought them clean! :D

We entered right in time for the national anthem. There was a mushy-but-sophisticated couple seated next to us. The crowd was decent enough- not like we had expected it to be at all ! The seats were indeed "special" like he had said; they offered the best view of the screen!

And so, the movie began.

My first ever movie review! :D 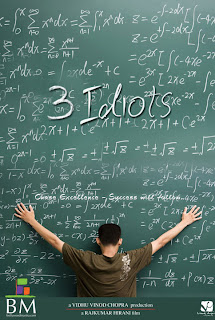 Rancho (Amir Khan), Farhan (Madhavan) and Raju (Sharman Joshi) are three bright students of the Imperial College of Engineering, it's Director being our very own Boman Irani -- Prof. Veeru Sahastrabuddhe.

Raju is the only son to his paralysed father and poor mother. He has an elder sister who is 28 and still unmarried because apparently, the guy's side demands too much dowry!! So, basically, Raju is responsible for his family, and he would be the sole breadwinner of the family if he clears with good grades, which inturn would give him a good, well-paying job. He feels too pressurised by his college though and the pressure affects his performance, which goes down considerably.

Farhan is passionate about wildlife photography but he gives in to his dad's wishes, and goes on to become an engineer. His unwillingness and lack of passion towards engineering leads to him always standing last in his semesters, barely scraping through his exams.

Rancho, on the other hand, is genuinely smart, an out-of-the-box thinker with ways of his own. He is very passionate about machines & engineering and thinks practically. He criticises and challenges the education system, but in the end, successfully makes the Director realise he's actually killing his students by pressurising them too much instead of nurturing their talents and leading them in  the right direction. His love interest, Pia (Kareena Kapoor) is the Director's daughter who is about to get married to a rich snob Suhas who cares much more about his own wealth and social prestige than her. Rancho makes her see for herself the snob that he is. He wins her heart at the end of the movie.

The movie keeps you on your seats all throughout. Every scene of it is very real and very entertaining. The end is a tad dramatic as Reema and Harsh pointed out, when Pia's sister Mona (Mona Singh) delivers her baby which does not cry at all after it's born leading people to think he's stillborn but kicks Rancho when "All is well" is said. Amir is the show stealer all throughout as always! :)


The movie brings out one valuable message: Follow your heart.


Songs are good too; they are placed at the right times in the movie. "Give me some sunshine" and "All is well" are two tracks everyone will enjoy.

The movie, however, is totally different from the book that it's claimed to be based on- "Five Point Someone" by Chetan Bhagat. The only similarity that I could see was all three of them were engineering students and Raju's character in the movie matched Alok's in the book. So I don't think the movie should be compared to the book in any way.

Lastly, I won't say it's a "one-time" watch. This is the first time I actually wouldn't mind seeing the movie again tomorrow! It's truly an eye-opener, a must-watch! Kudos to Amir Khan and more so, to Rajkumar Hirani.

oh come on! you got the tickets cuz u r girls..

Nice writing! but not fair to open up the story!

A film with Bollywood gags and masala, was fun here and there else nothing interesting.

oye... have u read five point someone properly? more than half the movie is word by word copy of FPS..
but good that u saw it.. even i saw it yesterday.. ekdum jhakkas movie.. :)

@Perx
Heeheee.. the advantages of belonging to the fairer sex! :P

@Anonymous
Hey I didn't open up the whole story, just gave a summary of it :D

@Kabir
Hmm.. I enjoyed thoroughly..to each his own I guess! :)

@Sukhdeep
Oye yaar TUNE nahi padhi hogi theek se!! Kya same lagaa tujhe except for the fact that the lead heroine is the Professor's daughter and Alok's character is the same as Raju's??

We had once bought tickets in black in Bhopal during our hostel days...that for Har Dil Jo Pyar Karega!!! sigh!! just cuz it was friendship day and it was houseful.

@Reema
Hehehe.. and was the movie worth it?

Hey anubha just read ur comments regarding the 3 idiots.

By the way who suggested u to go for the movie..u should thank him !!