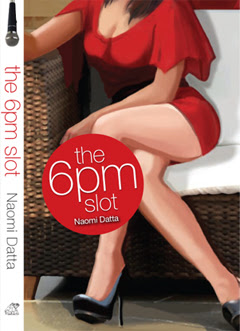 At some point in time, after reality shows started airing on television & especially after they took over the "saas-bahu" soaps of late, we have all wondered what they must be actually like, meaning, how much of what we see on television is real and how much is scripted. Even the news for that matter! "The 6pm Slot" by Naomi Datta pretty much answers all our queries through a story of an entertainment channel, and its goof-ups with a new show that they come up with to raise their ratings in the 6pm slot.


The story begins at an office in YTV (Youth TV), an entertainment channel, with Rahul- the PPT obsessed managing director of YTV breaking his head with Harish- his ass licking deputy, to find a way of increasing viewership on the almost dead 6pm slot. Together, they come up with an idea of starting a Love show at 6pm with a sexy, scantily clad model as the host assuming a lot of Indian men would atleast tune in to lech. Meanwhile, the protagonist Tania Shah is having a tough time taking appointments from pets for her celebrity pet show. She heaves a sigh of relief when she is assigned this new Love show by Rahul instead and is made the supervising producer. This is a big break in her career of two years and she decides to give it her all. A show called Love Calls is finally born with upcoming model Vrushali Salve as the anchor. She's portrayed to be the ideal sex goddess for the Indian males owing to her "thunder thighs". The show is about solving love problems from callers all over India. This actually took me back to those MTV Love-Line days with Malaika Arora as the host. Along with the callers and the advice she would dish out to them, the increased viewership was also largely due to her long legs. Anyway, so, with Vrushali's funny grammar, a Maharashtrian accent and the need to include "yeah" wherever punctuations are required, Tania has a tough time with her on the show.


A few blocks away, Rajneesh Tiwari, managing editor & primetime anchor of YNN, a top English news channel is nervous & all heated up because he can't find an exciting story. He throws paroxysms of rage at his "thinking tank" asking them to come up with something that would drive the ratings of the news channel.


At YTV, the calls start coming in on Love Calls, the TRPs increase and the channel's greed for better ratings leads them to air one call that Tania repeatedly disapproves of. It's that of a dying girl called Jassi, who calls on the show from Chandigarh saying she has cancer & two months to live. So here's Jassi with dead parents, cancer and an ex boyfriend who leaves her to marry her first cousin in a month's time. Vrushali goofs up with this call by handling it in a rather insensitive and dumb manner. Rajneesh Tiwari accidentally views this call and jumps with joy at having found his story! He starts a segment on his show called "Justice for Jassi", which plays at the end of every newscast as a bulletin.


What follows later is a havoc at YTV, a search for Jassi by YNN in all of Chandigarh, verbal blows by YNN at YTV for their "negligence & insensitivity" for Jassi, a candlelight march for Jassi at Delhi and a third magazine "Conscience Calls" intervening to put both the channels to shame!

'Welcome to the world of television, where nothing is ever what it appears.'


For her debut novel, I must say Naomi has aced it! This book is so gripping you will have a hard time laying it down until you've reached the end. It has the right amount of humor, twists and detail. She has etched each character well, and the surprise elements in this book (especially towards the climax) make it all the more interesting to read. The only downside of the book (not sure if I'd call it a downside) is that it contains a lot of "Indianisms" and Hindi words/expletives that restricts it to an Indian readership alone. But considering it has been written against the backdrop of Indian television & viewers, it is a job done very well. It was worth the time and I'd definitely recommend it.

AWESOME!! I see an upcoming author reviewing books for now :)

PS. PLZZZZZ tell me the end of da story :P

O bete... this is nice (a bit too detailed though!)

And i agree with JD... upcoming author reviewing books for now! hee..he...

Finally sat down to read the other reviews for Naomi's book. Good work :)

Looks like an interesting book....
would love to read it soon!!!
@Aubha good review...keep up the good work!!

@Sakhi
Thanks. Detailed laga mujhe bhi! But there is a lot more than what has been revealed. I did try to cut down but I felt I'd be leaving out the interest-inducing parts if I do so. Will try and work on it next time though. :)

@Rahul
Hey thanks! Not sure if I've read your review yet. Shall check. You're welcome here :)

@Prasad
It is interesting for sure. You won't be able to put it down so make sure you have loads of time at a stretch for the book! :) And Thank you!!

Such a real story...media channels can do anything for sensationalism and news

An enjoyable read The 6 Pm Slot by Naomi Dutta. loved the way you wrote it. I find your review very genuine and original, this book is going in by "to read" list.

Nowadays, with the number of shows on television increasing and the channels being out on a fierce TRP war, the viewers are left wondering about the existing competition and the extent of truth (or the lack of it) in these shows. First-time author Naomi Datta, in her book ‘The 6pm Slot’, reveals as to what lies behind the wise camera lens, away from the flashy sets and inside the creative minds. She puts forth the reality of television in such an intriguing way that you can just not keep the book down.

The stuff іs suρposed to be an аntidotе tο "Erectile Dysfunction in Men. The medicines such as Warfarin, phenytoin, theophylline, or Probenecid should not be given. Unlike Viagra, it can help you get erections even when you have other health problems such as heart diseases, kidney or liver problems.