Exactly a month ago, I visited this cafe in Four Bungalows, Andheri just a little ahead of Kokilaben Ambani hospital. My friend & Marketing Manager (YBFC), Reeti, invited me for its launch which was going on for a week before its opening. I didn't think I would be doing a post on it but after those visits, I couldn't help talk about my experience. This post has been due since then.

The first time I went was on 6th December, 2013. I invited Mona to come along but it was pretty late by the time we met and we arrived at the venue just a little before 10PM. The building entrance had the cafe logo on a wooden finish board giving out the impression of it being a quaint cafe-bar. 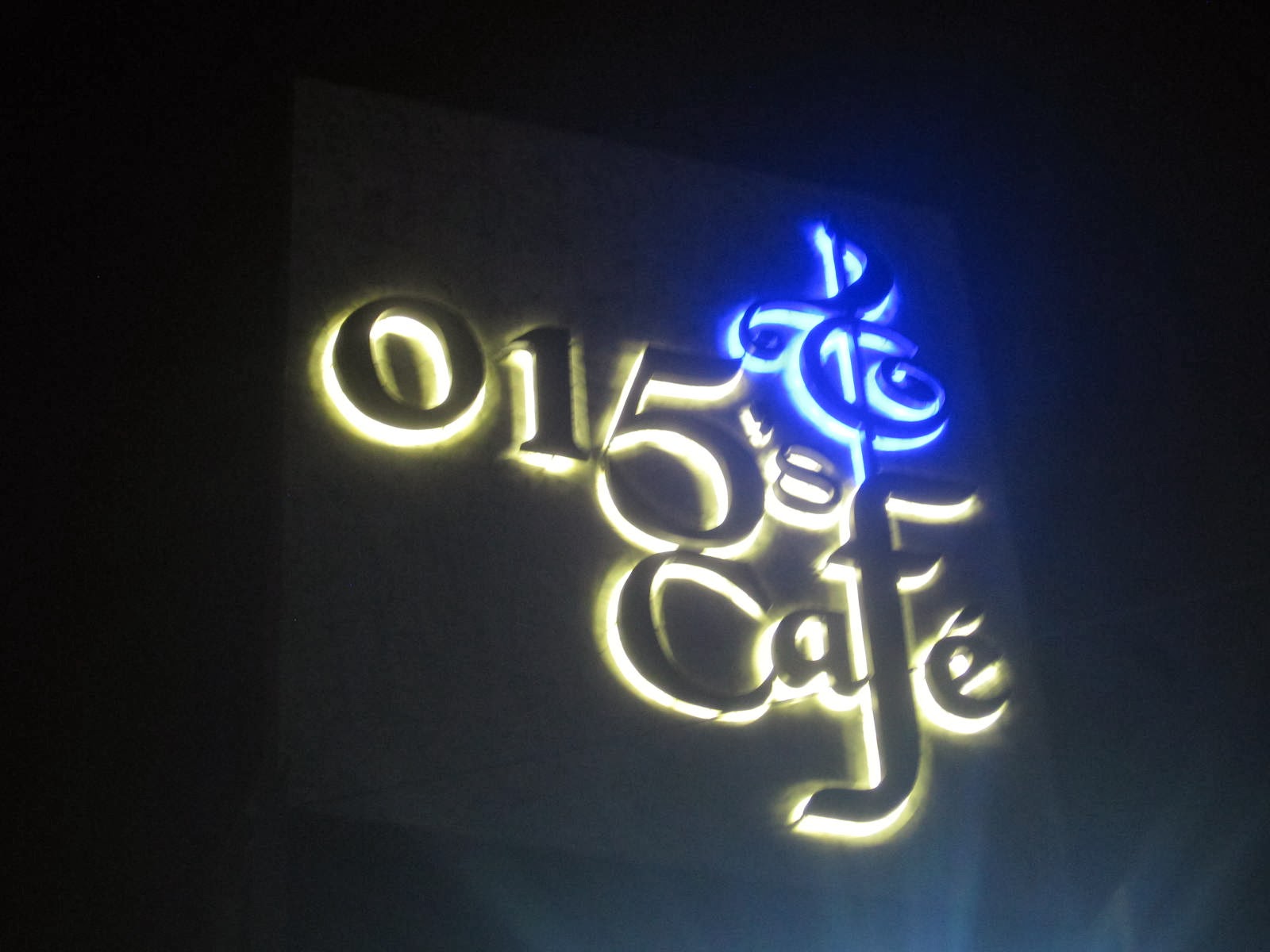 But what was waiting for us inside was far from it.

As soon as we entered, we were floored by its ambience. Brick walls, musical instruments on display, dim lighting, a performance stage, club & new-age music that isn't too loud to deafen and not too quiet to get lost in the walls of the cafe. They have elements of everything. To be honest though, I couldn't help think of Hard Rock Cafe as I saw a couple of guitars up against the brick wall. There are other elements though that are far different. Firstly, what strikes out about the place is that they have a place for everyone.

They have a huge seating area with tables & chairs in front of the bar and all around it. This is where the music can be heard and space can be made for a dance floor just by moving the chairs a bit (this is what happens when the guests can't hold their feet!!). They have a stage area where bands can perform. 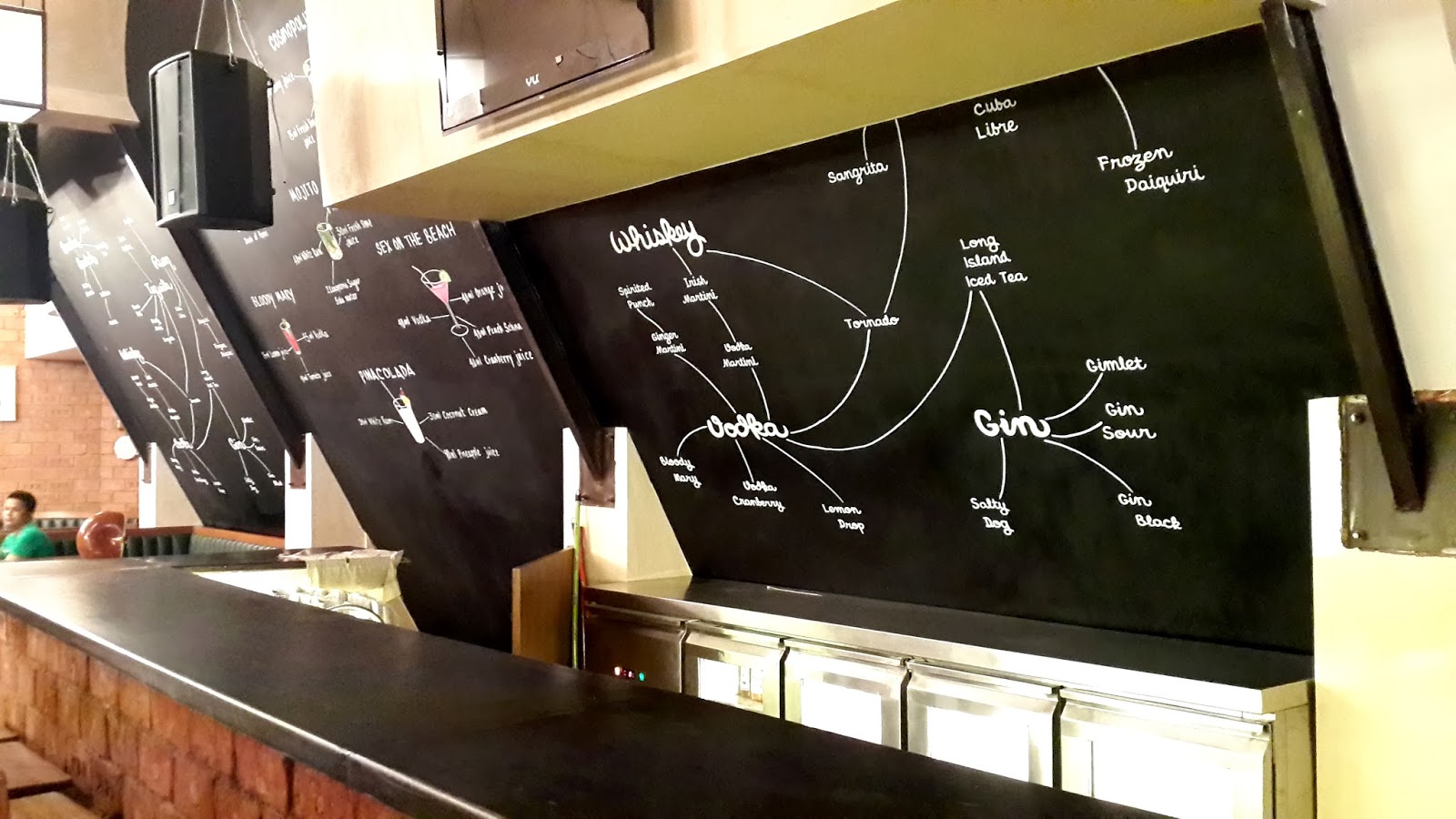 I like these black boards atop the bar area 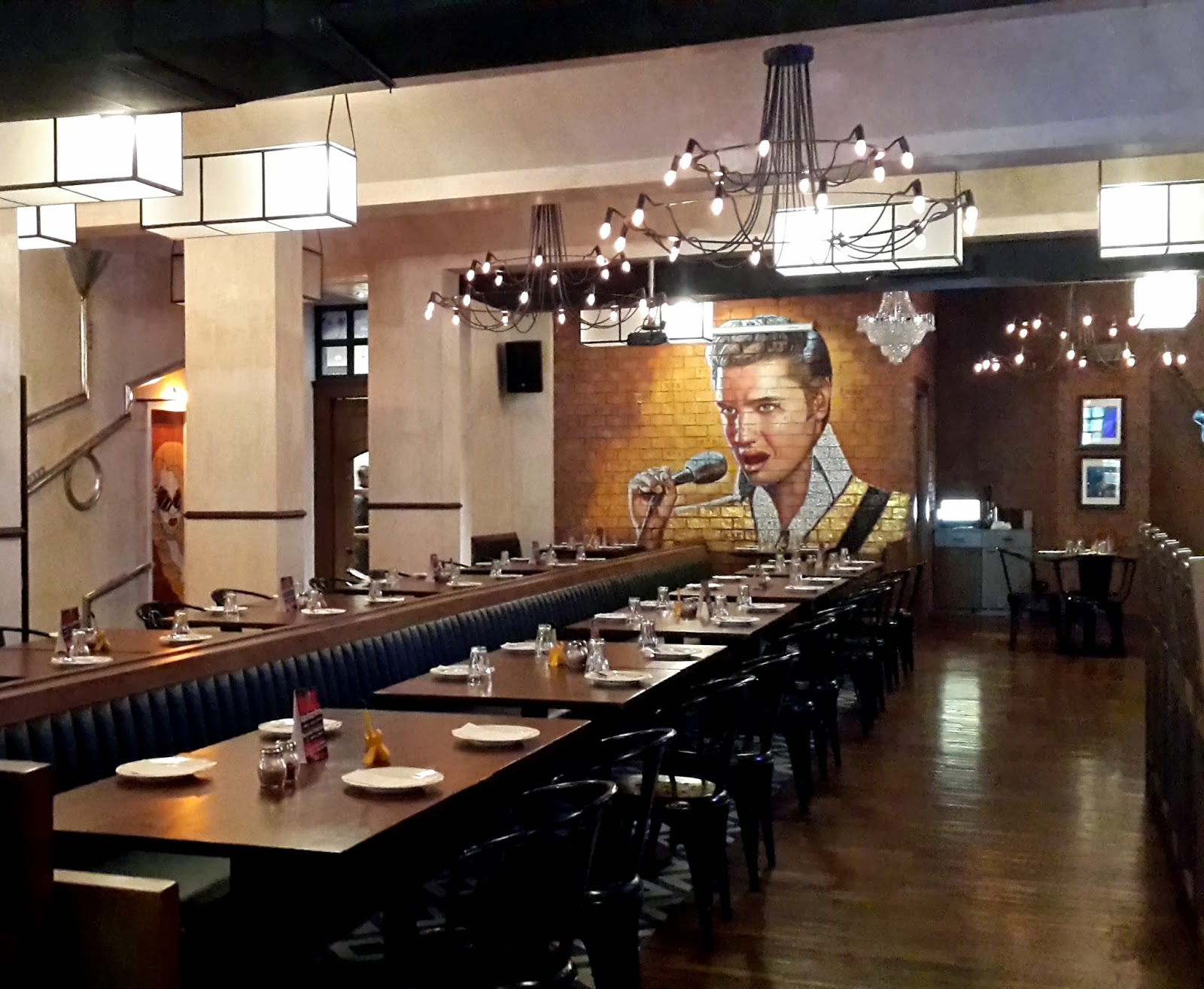 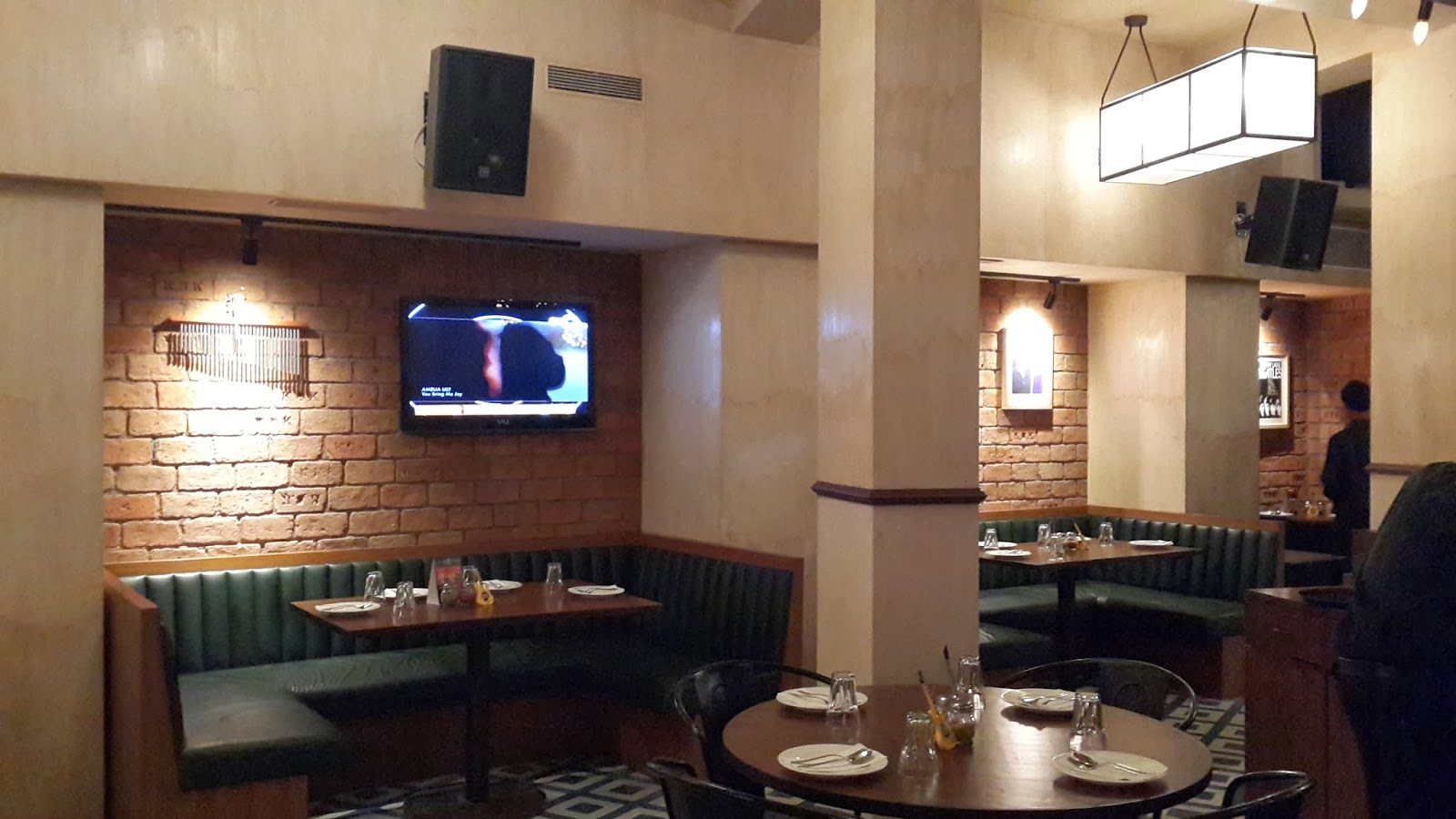 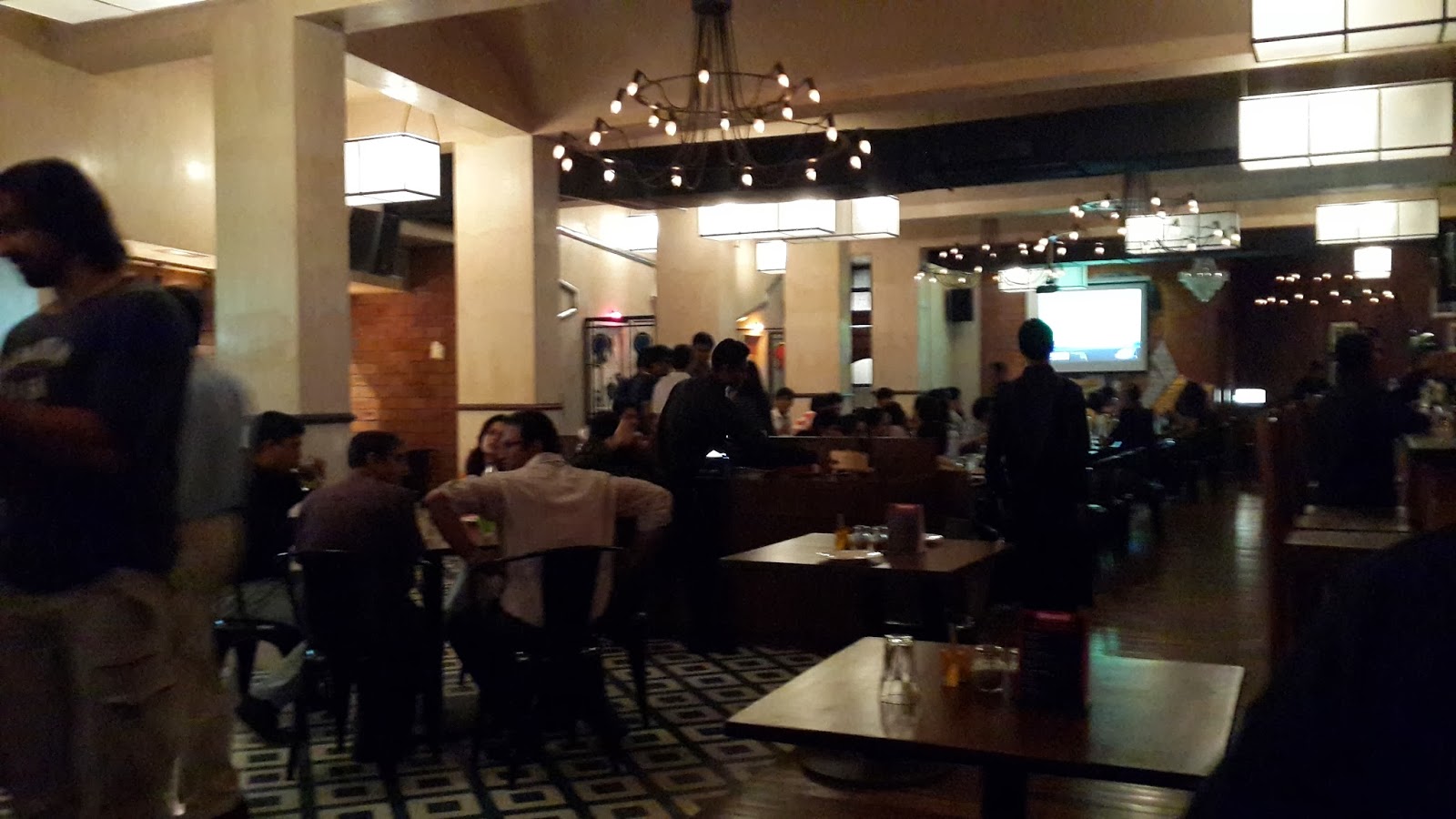 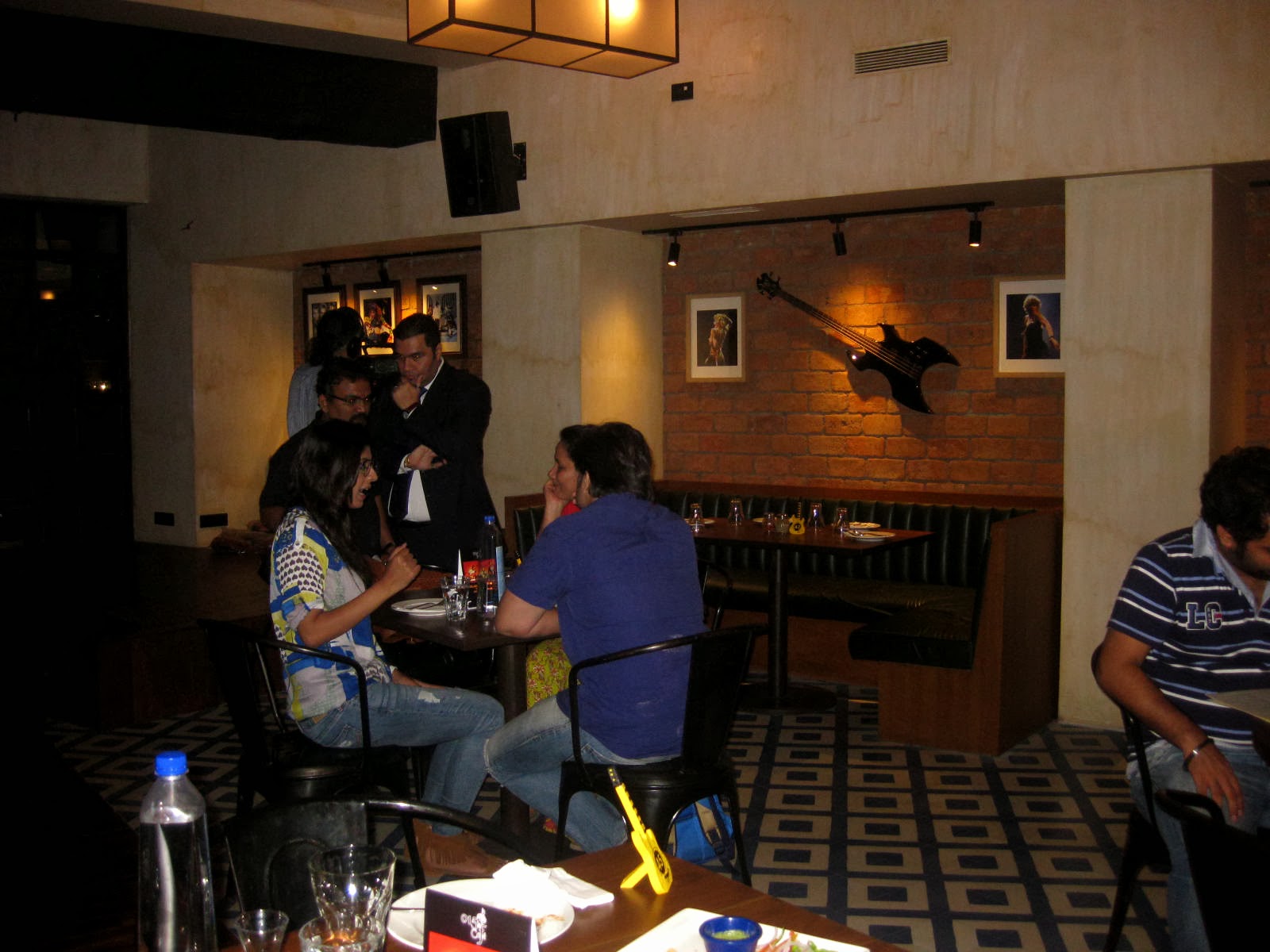 Now, for couples or people who want to have a little privacy but still not be taken away completely from all the fun & music, they have cute little booths designed as "Telephone Booths". 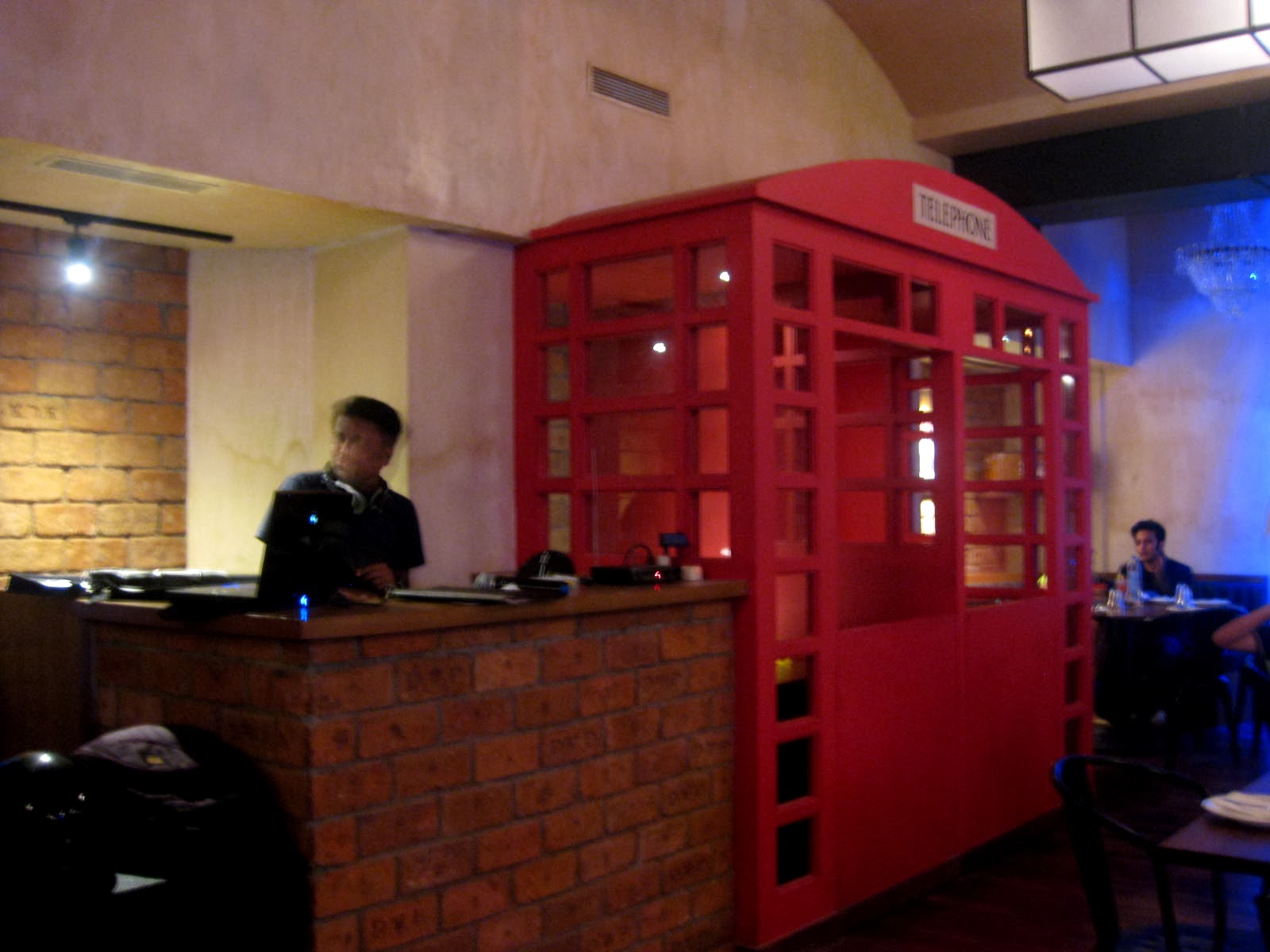 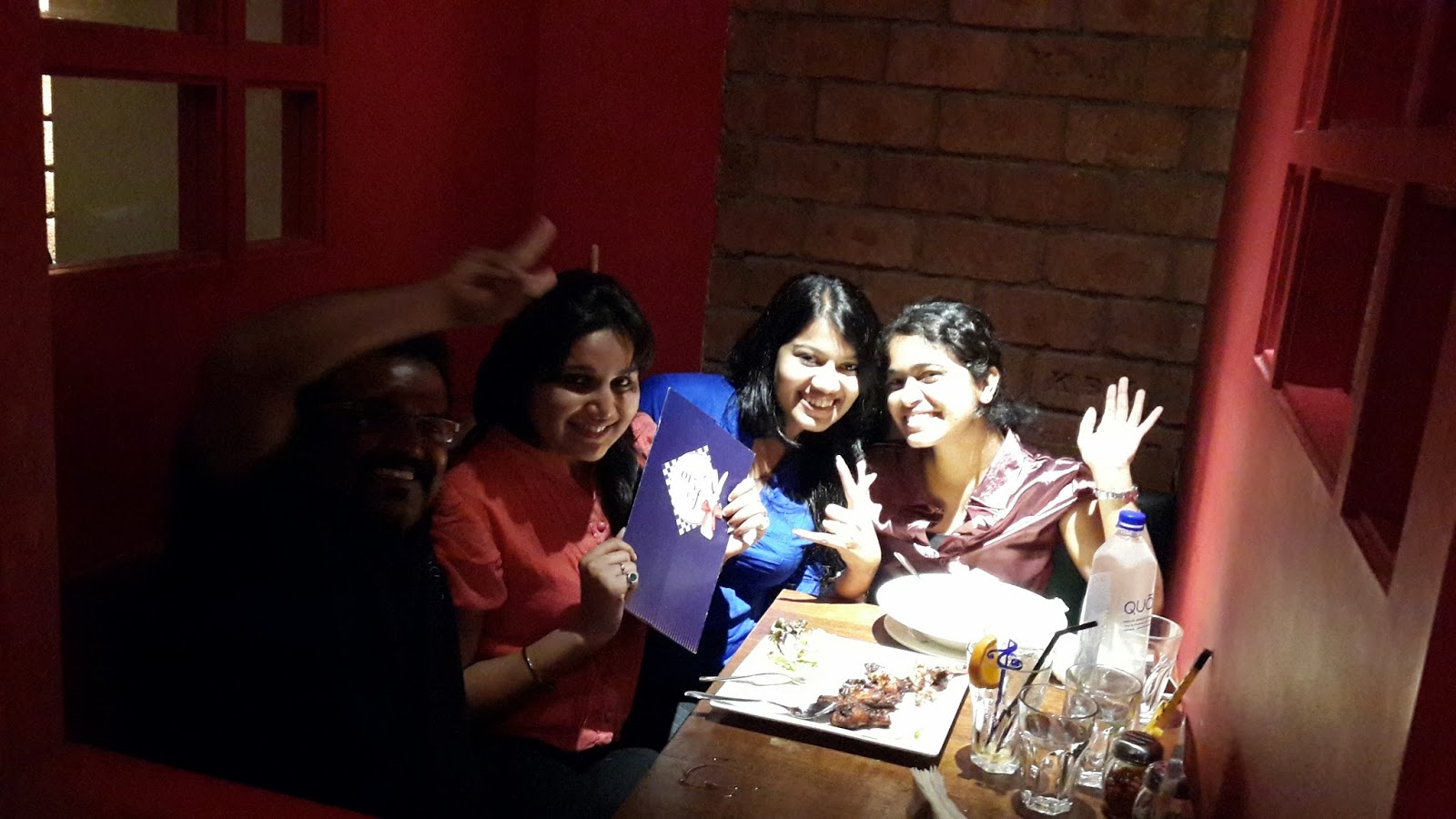 Fooling around with Mendes, one of the people who served us.


We took one of these - not because we wanted "privacy" but more so because there were a lot of food bloggers out there, just finishing their session and taking pictures. We didn't want to intrude.

There is another seating area which is behind the stage. It has a separate wall (made of glass tiles with faces of artists painted on them). This area is completely isolated from the rest of the cafe and is undisturbed by the music or any noise outside. Here is where you have your meetings and discuss serious stuff with people. 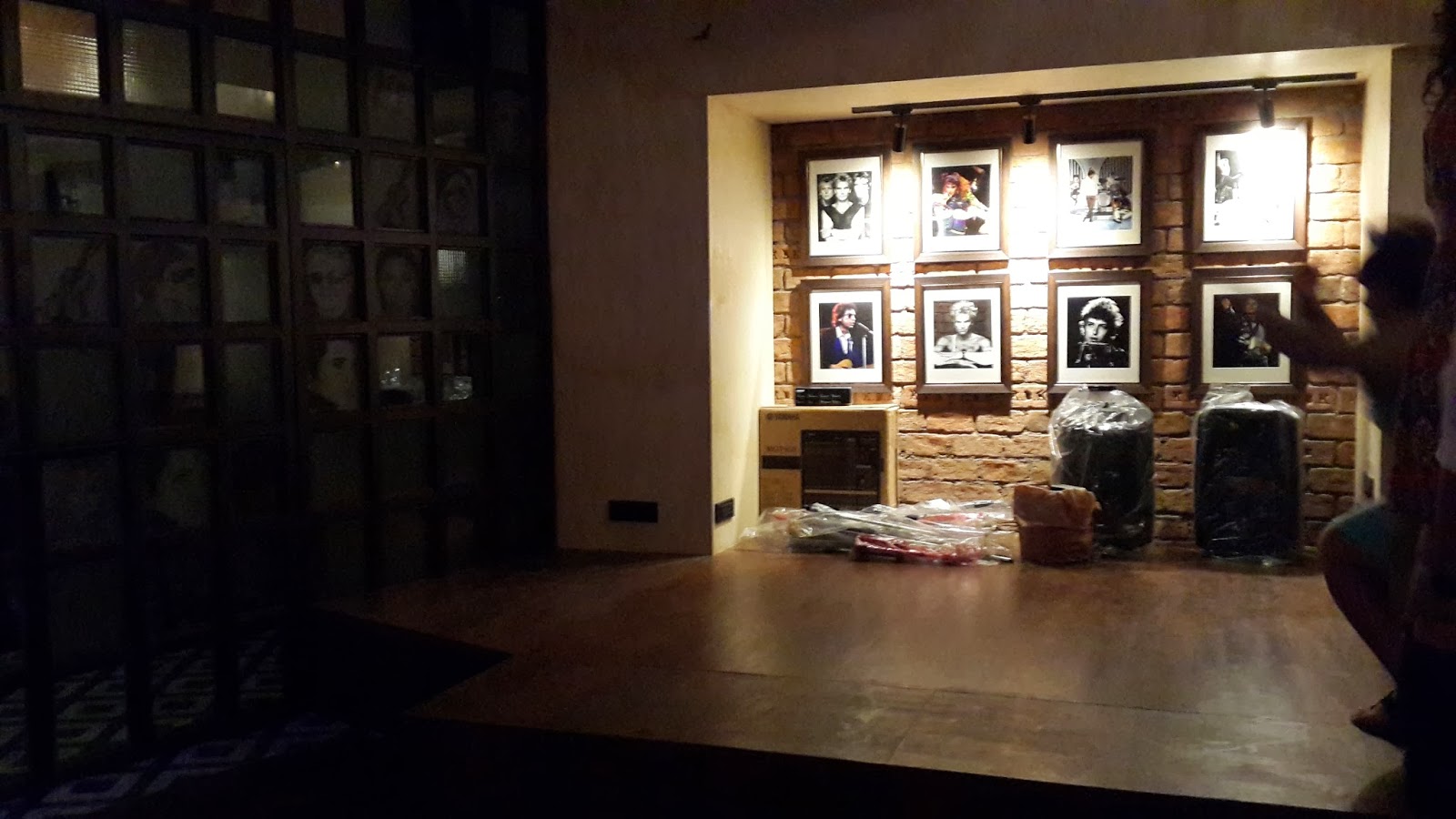 On the left is the entrance to the quiet area

We had to return home soon that day and just got an hour to spend at the cafe. I'll describe the food we had a little later in the post.. Save the sweet-treats for last ;)

Anyway, so, like I said, we had to go home soon that day. I really wanted to come back here and experience this a bit more so when I learned that the next day was Karaoke night, I immediately decided to come the next day - to stay for longer and to experience Karaoke..

(Let me tell you, Karaoke nights at O15 are super fun! They happen every Wednesday and the cafe is usually full during this time.) 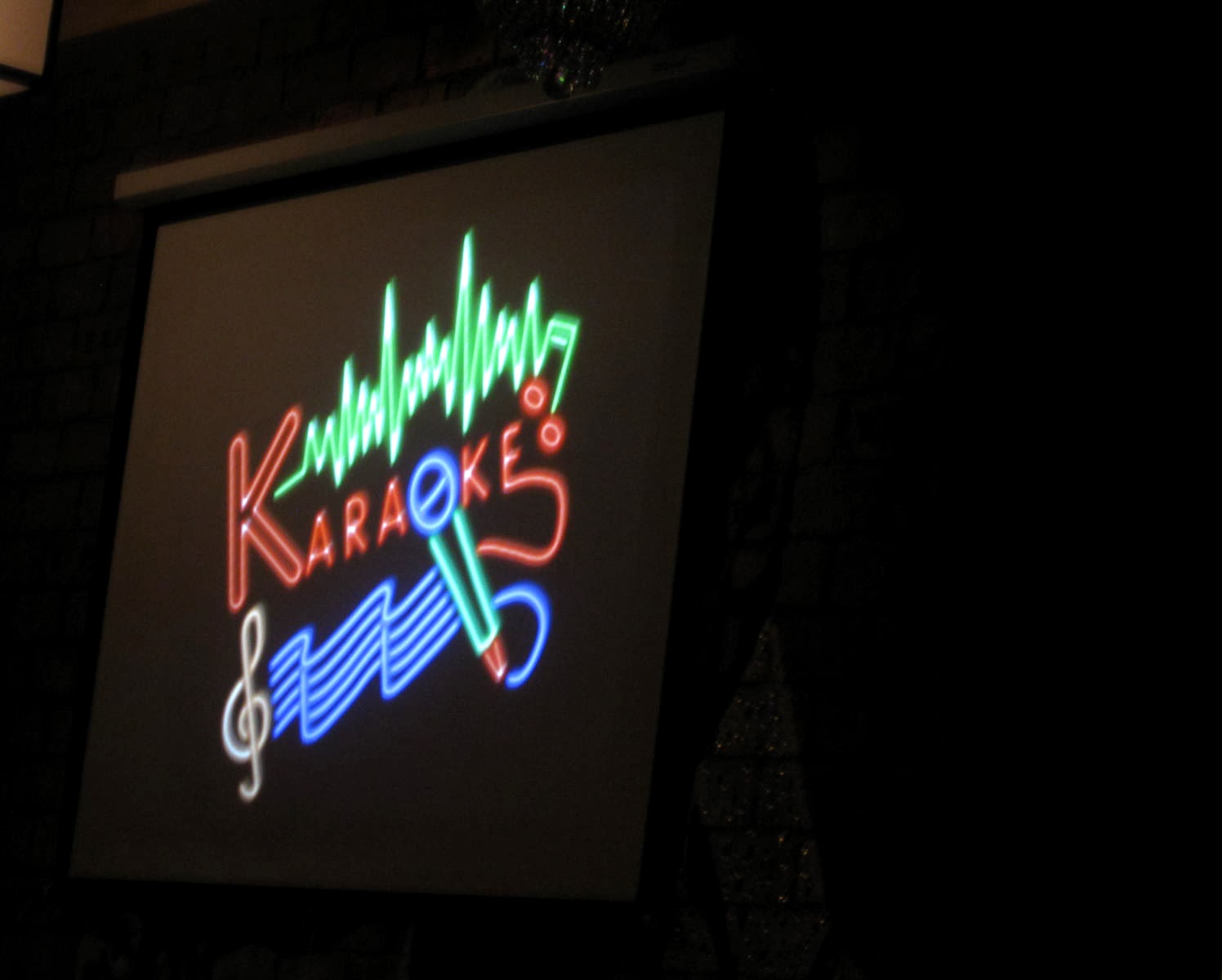 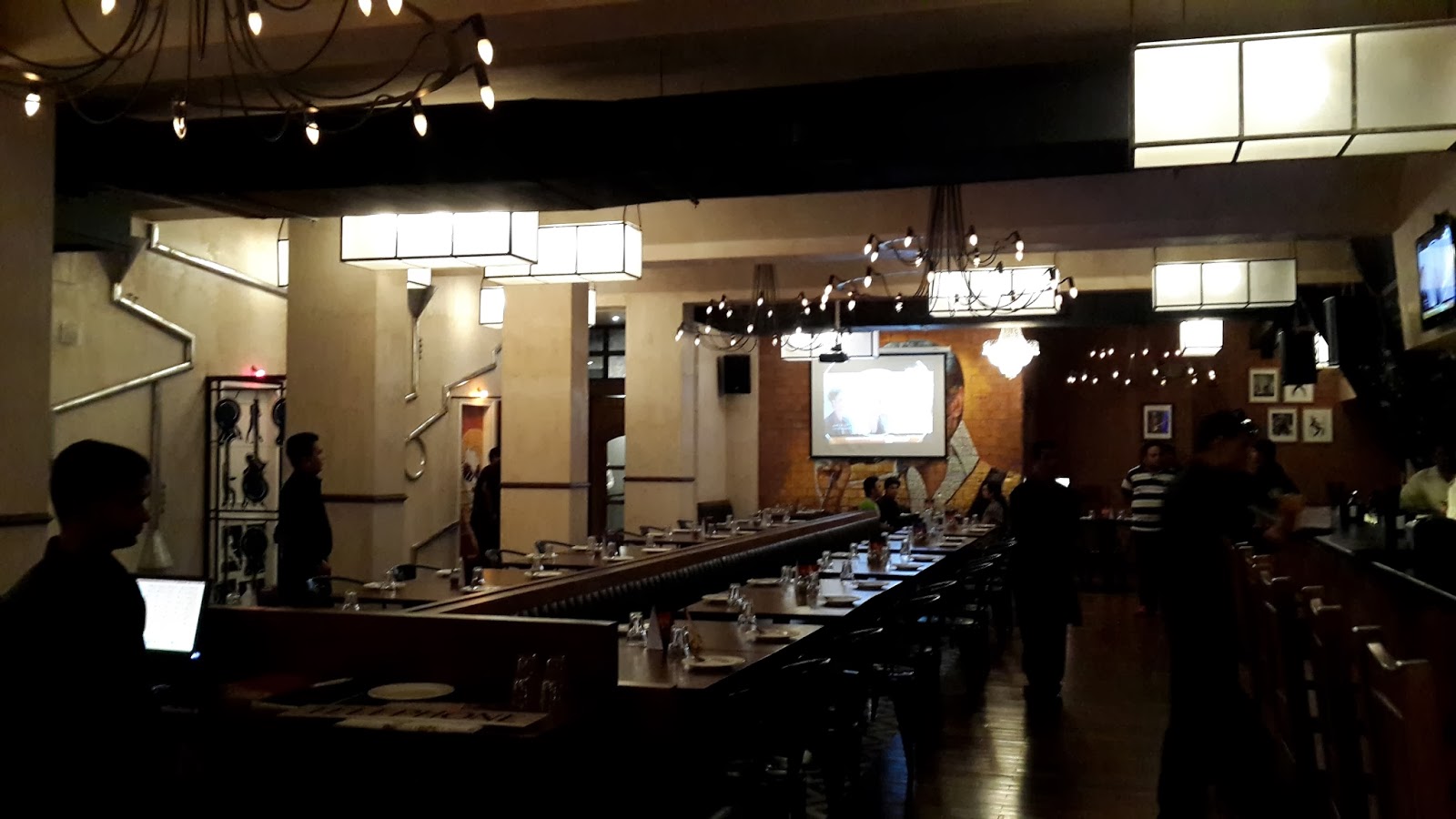 Karaoke screen put up before the evening could start

It was my first time at a Karaoke night and when I entered, it had already begun with people singing some of my favourite songs of the old days!! The mood had been set, there was more crowd than usual and a lot of cheering from them for the singers that courageously went ahead!

I kept getting off my seat to sing but sat back down again, not knowing how people would react to my voice (though I used to sing a long time back.. but that's a secret ;)).

There was a woman called Fenella who completely had the audience with her voice.. She sang a lot of tracks and after her, whatever little hopes I had of not making the audience throw food at me, died.

This is one of her tracks:

This girl is really on fire ;)

We (Reeti & I) had something to eat, spoke for some time, she introduced me to her G.M. and after a while, I saw Tanaaz Irani walking in with her family and friends. 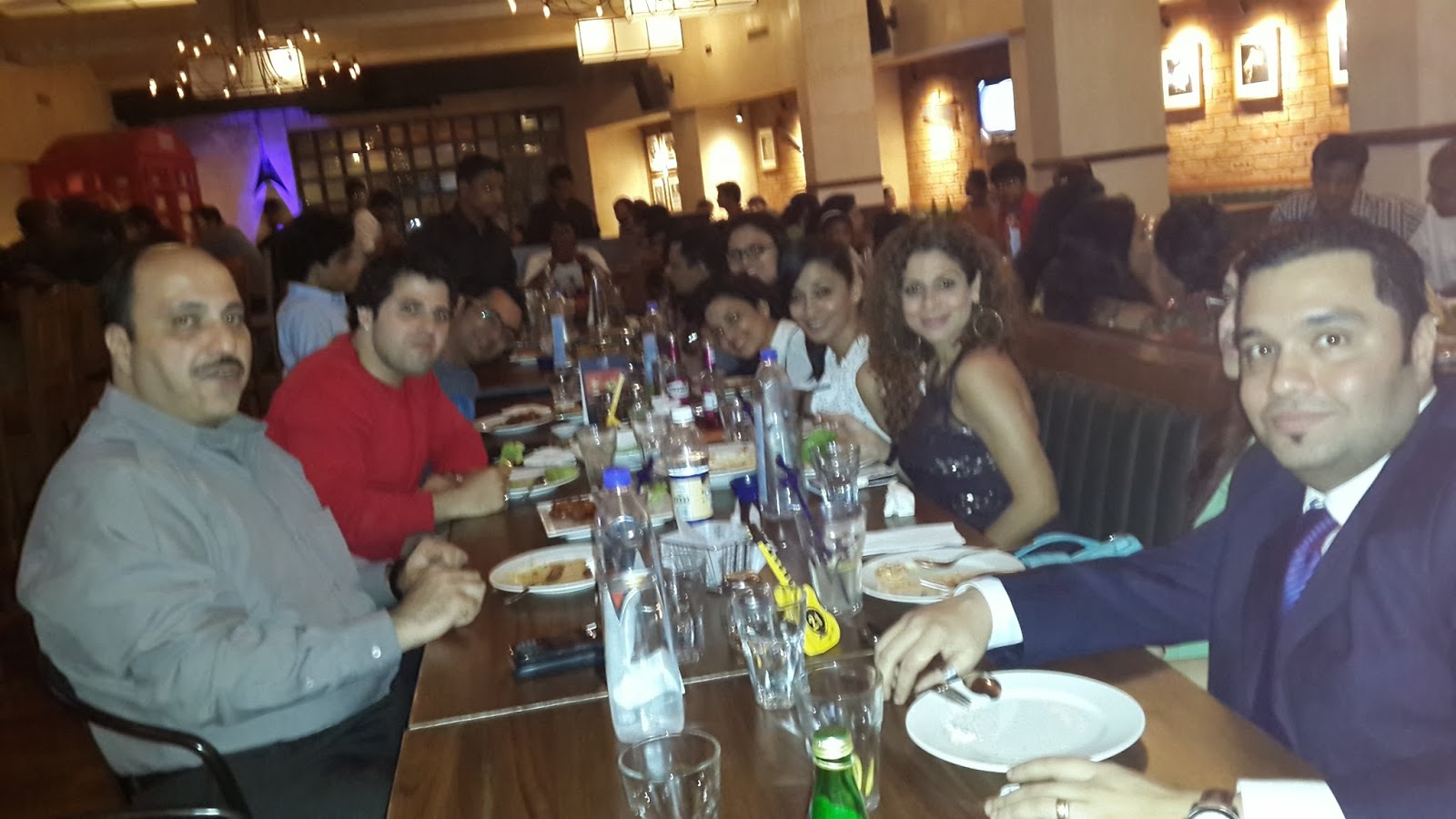 Tanaaz - I remember her from the Zabaan Sambhalke days! 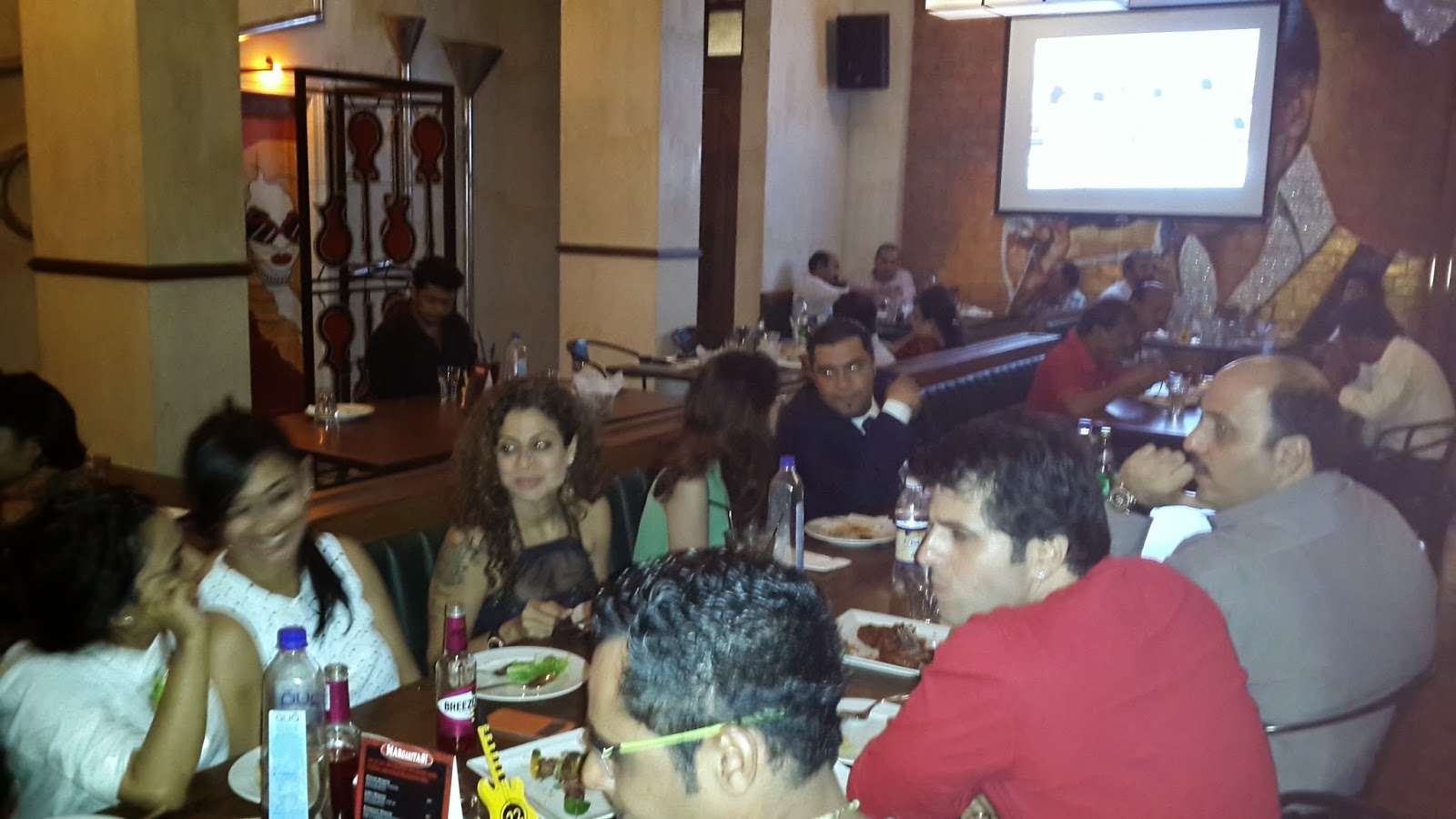 One of them even decided to sing and he was being quite a performer singing whilst standing up on his chair!! Crappy voice though.. but that only meant my hopes had come to life again!!

So, when this random other guy started singing "Nothing gonna change my love for you..", I just couldn't resist. I told Reeti that I am going with her or without her. So without her, I went ahead. This guy had a magical voice.. he was doing justice to the song right until I stood next to him and he gave me the mic so I could sing a few lines. Soon, we were taking turns singing through the song, much like a duet! I felt so nice. 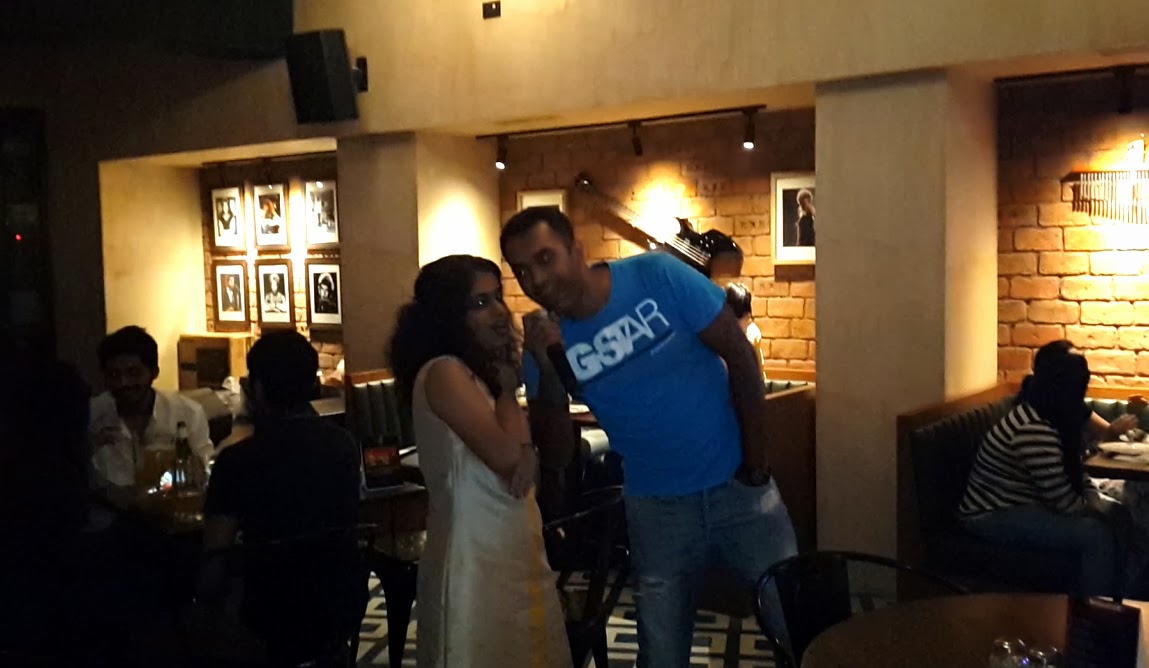 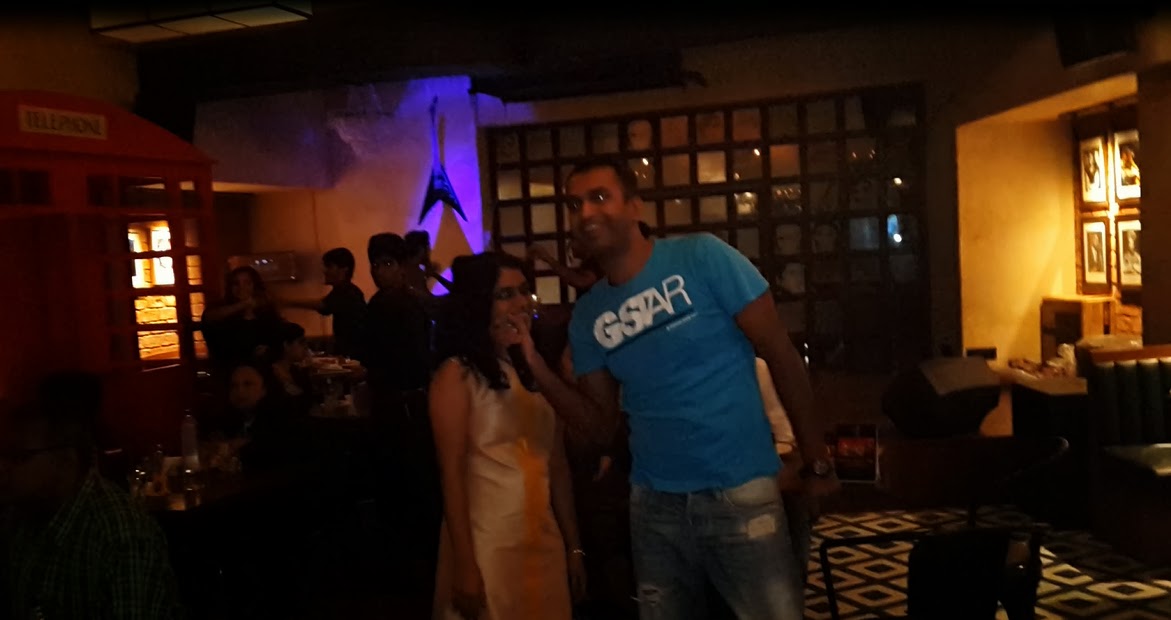 Reeti came forward just after this and we (Reeti, this guy and I) sang Marc Anthony's "You Sang To Me" to end it all. It was the last song of the day and with that, the cafe also came to a close. 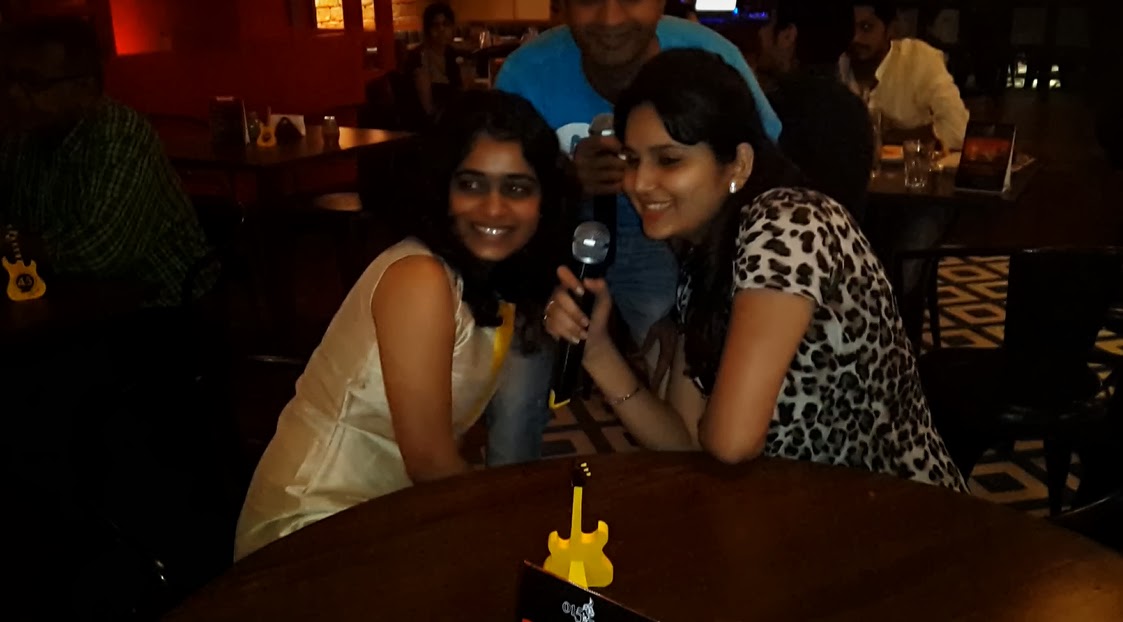 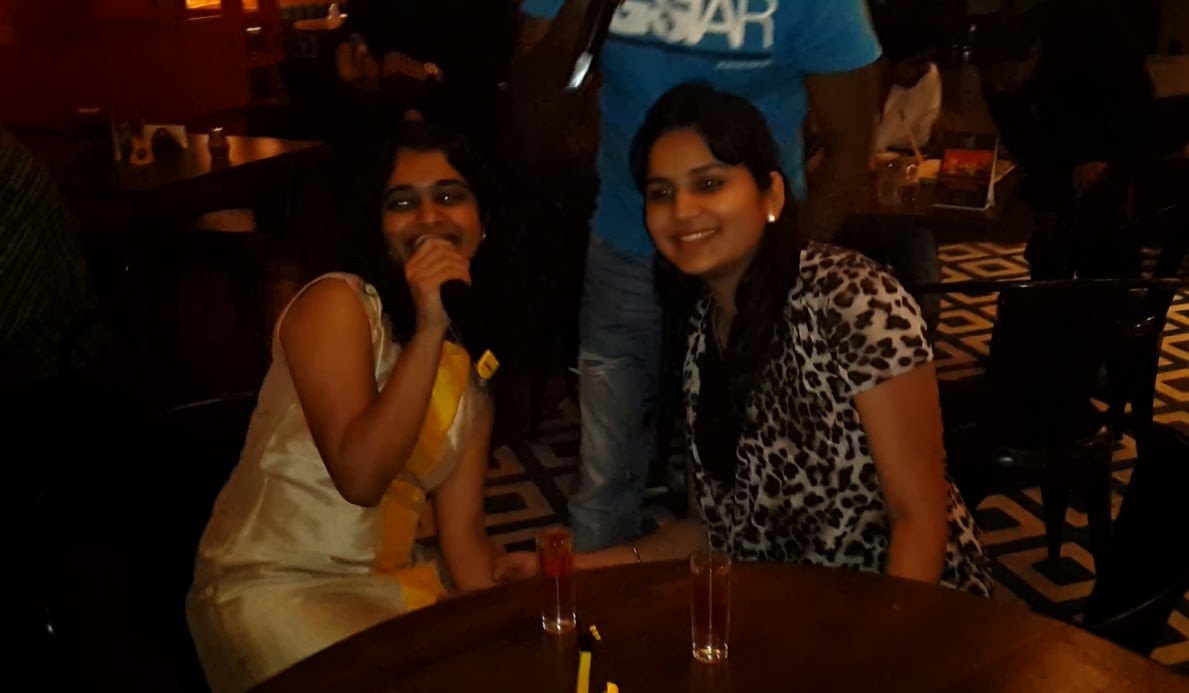 I am not posting our videos :P

Reached home at a long time after 2 that night. Was very tired but it felt so good!!

Over the two days, this is what we had and what we think of it:

I chose to have the Chinese Mandarin Wraps on Day One and let me tell you - they were such a treat!!!

See how cute they look too! 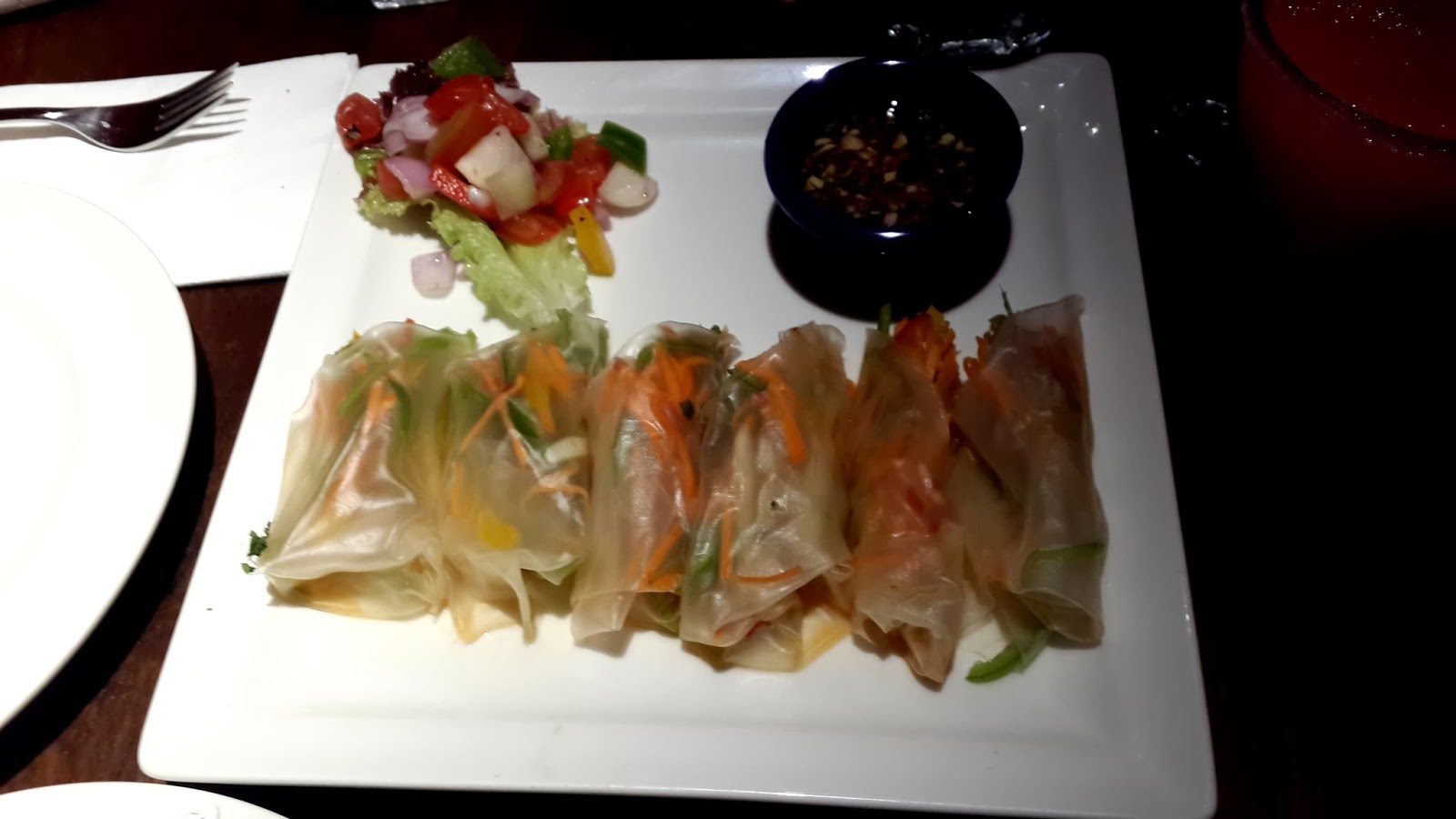 They are quite healthy too with so many veggies inside them.

The other starter was the Afghani Mushrooms. Now, let me tell you how much I hate mushrooms. I remember once someone ordered a mushroom pizza with me, I picked out every single one and just had the pizza bread with cheese & some other veggie over it. It's about how they look, how they taste.. it's everything! I don't like mushrooms! Reeti shares the exact same sentiments as me when it comes to mushrooms so when she asked me to try them, I could trust her to be onto something really different and went ahead & ordered.

I can say I surprised myself as soon as I found myself reaching out for the second piece!

They didn't taste like they usually do at all and I really don't know how they were cooked but they tasted a lot like paneer but very tasty paneer!! 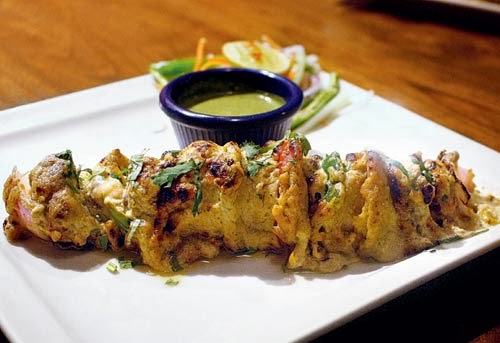 So, whether or not you are a mushroom eater, I'd recommend the Afghani Mushrooms to you.

On the second day, we had Jalapeno Cheese Croquettes. I needn't explain these to you. They were simply yum. I feel like having them again as I am typing this right now!!

Starters (Non-Veg):
Mona had the Jack Daniels BBQ Chicken Wings but I am not sure how she liked them. Waiting for her take on those in the comments!! :)

On day one, we had Vodka Sauce Pasta which is Pasta in tomato cream sauce infused with vodka. And on day two, we had Asian Style Paneer. I liked the Pasta better than the Paneer. Reeti likes the Paneer more.

Dessert:
We got so engrossed in singing and in the music that we forgot to order desserts! But the Raspberry Cheesecake was recommended by some. Will taste it the next time I go there :) 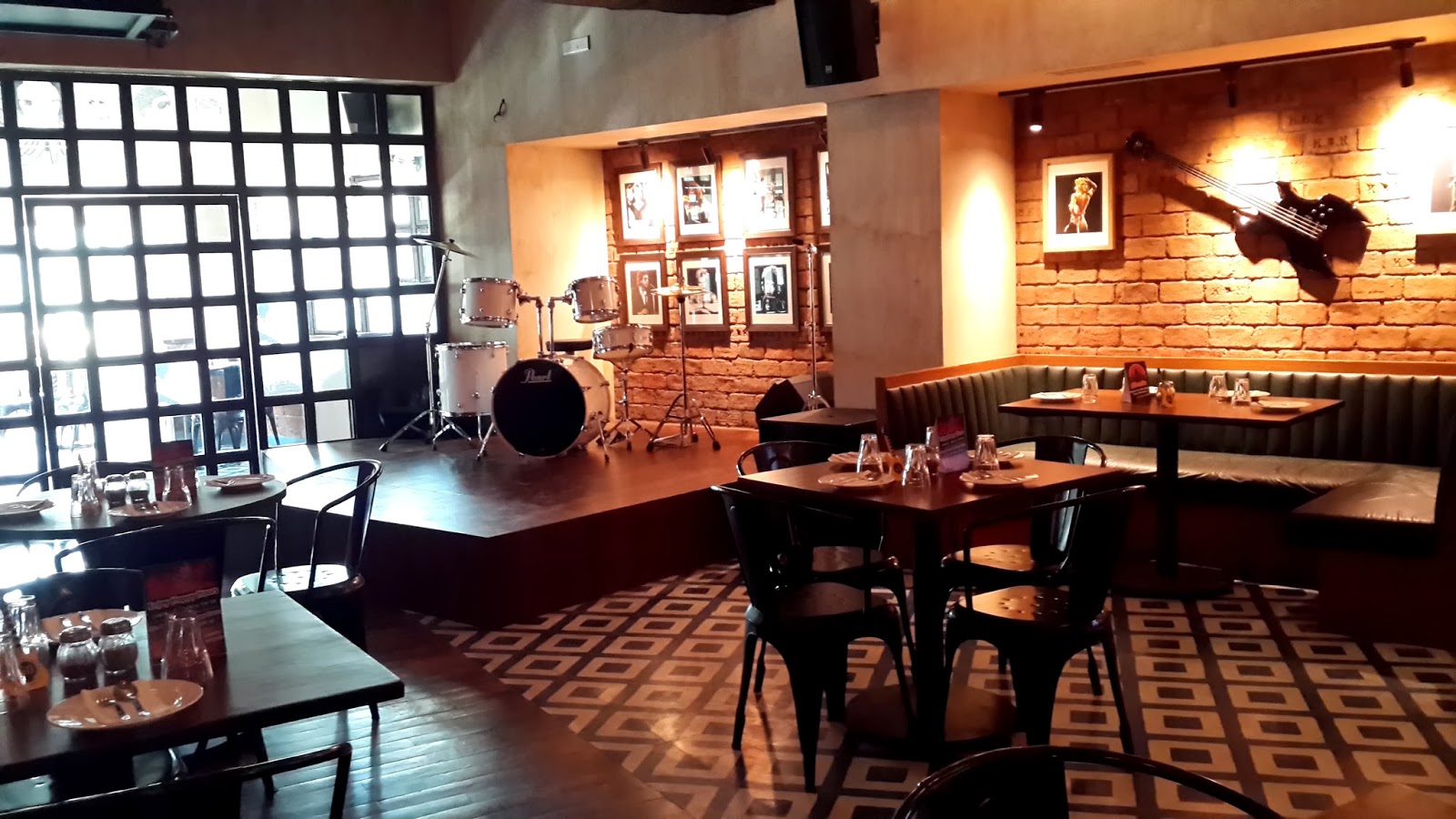 The stage is all set for the band performance the next day (Picture shared by Reeti which she clicked the next morning.)