My hair smells awesome. All thanks to the Dove Nourishing Oil Care range of products that I bagged on Sunday at the Dove Spa & Indiblogger Womens' Blogger Meet at Four Seasons!

It was my first all-womens' blogger meet. Besides the free massage & hair spa sessions mentioned in the email that lured me into going, it was also the fact that IndiBlogger had organised it that made me look forward to the event. I remember having a really good time at the last Indi meet I attended.

The event began at 11:00 a.m. and I walked in at 11:50. Luckily for me, the introductions hadn't started yet. People were seated; some were already getting their hair done and I registered myself for the treatments too! We were told that we'd be called in for the treatments one by one, in order of registration. Soon, I caught up with Idea Smith who was sitting in the first row with Shruti. There was a big screen in front of us that showed live tweets of the event. After exchanging hellos, I helped myself with a glass of lime juice and Sowmya, the brand manager of Dove approached us to have a little chat. She gave a few quick tips on which product to use when, and went on to explain how essential a role a hair mask can play in hair care. Apparently, a hair mask should be used after you shampoo your hair. A conditioner and a mask should never be used together. Shampoo your hair, apply a mask, leave it on for 20 to 30 minutes and rinse. While it is advisable to condition your hair each time you shampoo, you should avoid it when you're applying a mask which you typically should do once a week or two.

The introductions began in a short while with the IndiBlogger guy with the Banglorean accent hosting it(I still don't know his name). You should listen to him speaking. His accent really has you floored :D Gift hampers were given to those with long hair, then to those with short hair .. and then eventually everyone got the hamper for something! :D The hamper included all the products of the Dove Nourishing Oil Care range i.e. a shampoo, a conditioner, a serum and a mask. 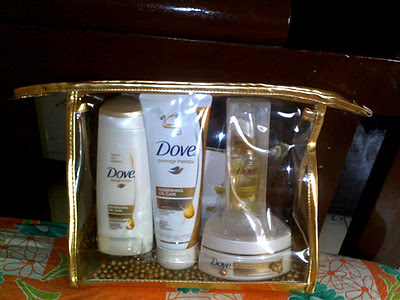 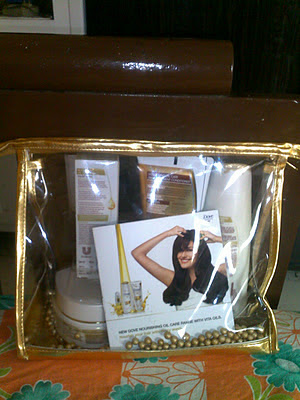 I have never used a hair mask before. I had heard of it only recently. Waiting to try it out now.. Anyway, so the introductions were in the order of who registered first and the big white screen in front of us showed who would take the mike next. There were a lot of interesting introductions. Everyone told a story of why they started blogging and what it meant to them. There was Laxmi Todiwan, a professor, who started writing hospitality journals before she took to blogging. Then there was Sulekha Rawat who choked while she told her story. Her father always wanted her to write and she started her blog after he passed away. The sweetest intro of them all was undoubtedly that of Anu Goel, who simply said, "Mera arts & crafts ka blog hai. Accha hain, aap dekho."

After the round of introductions, Piyush from the Dove team took stage to tell us about the new range of products. A lot of women refrain from applying oil to their hair for several reasons. They don't like the greasy feel and they also think that it makes them look like a nerd. The Dove Nourishing Oil Care range is supposed to nourish the hair with just the right amount of oil without making it greasy or appear 'nerdy'.

Soon it was time for lunch ..my friends Reeti and Sheetal had arrived in the middle of the introductions and we went for lunch together. The desserts looked so yummy we were tempted to start on them first! The main course was just as delicious. And we later found out that my friend Alisha, who works at Four Seasons, had prepared two of the dishes from the main course! :) 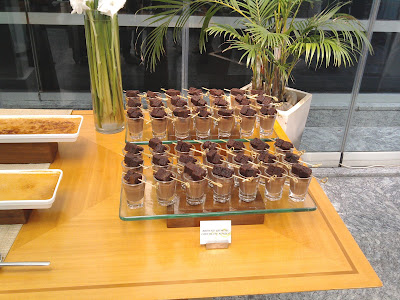 One of the dessert items :D
Right after lunch, it was turn for our foot massage. Although we enjoyed getting massages together, I wasn't very satisfied with the experience. Maybe I was expecting a lot more. It IS fun getting yourself pampered though :D 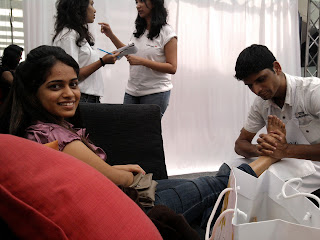 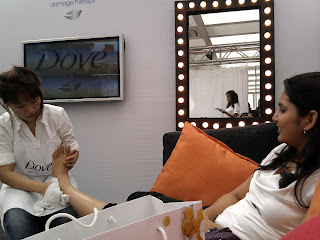 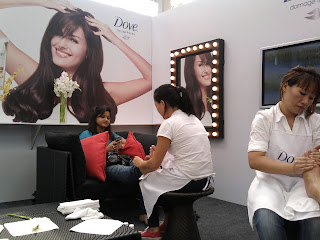 Foot massage sessions at the Dove Spa meet
Just like in the last Indiblogger meet, after the foot massage session, we were given white cards to hang around our necks so that people could write something on them. Julie called it an opportunity to say something behind people's backs! :D Later, those with something creative written on their cards were awarded gift vouchers worth Rs. 500 by Shoppers Stop. I got one too, thanks to Idea Smith, who did this: 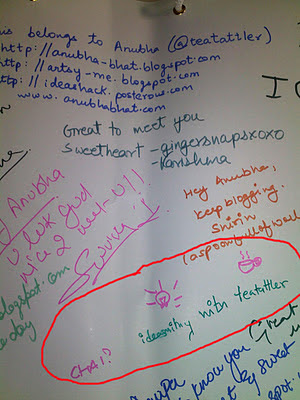 Circled the part which won me a voucher! Thanks Idea!
For those who don't know it yet, teatattler is my Twitter handle, and @ideasmithy is hers.
People who wore white to the event also bagged vouchers and Reeti was one of them :D I think almost everyone won something or the other..
Idea Smith later moderated a small bloggers' session where we discussed several things ranging from how we could optimize our blogs for Google page rankings to what some of our most embarrassing moments on the blog were!! After the bloggers' session, Indiblogger had organised a fun treasure hunt where we were asked to make groups of ten, name our group and have these things ready as soon as we could: The treasure hunt...
We called our group "The Hunters" and our slogan was "No one hunts better than the hunters" :D Our stolen item was a knife that I had stolen (borrowed) from Four Seasons for our Bollywood fighting scene! :D It served two purposes.. We couldn't find a red rose so someone actually painted a white rose with red lipstick! We got a score for the knife and the red rose. In the end, all groups were winners and each group got a gift voucher worth Rs.1000 from Shoppers Stop.
Sowmya, the brand manager of Dove took the mike later and talked about hair problems, their cause and remedies. She took a lot of questions from the audience as well. She said I had gorgeous hair, and I had simply damaged them by chemically treating them :D I wish I thought I had gorgeous hair myself.. would have never exposed them to chemicals then! Anyway, she recommended using a hair mask which would protect the chemically treated hair as well as ensure that the new hair that was growing was nourished enough. The session went pretty well and she was really patient with all of our hair care questions. 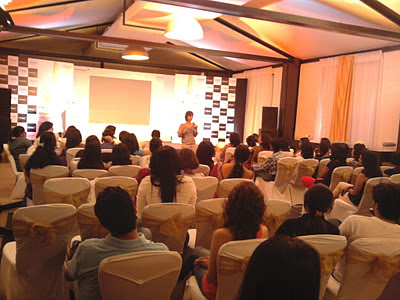 Sowmya on how to take care of our tresses..
We sneaked up behind for a cup of tea/coffee during the session.. and I was amazed to see such a variety in flavours of tea neatly arranged. This deserved to be clicked! 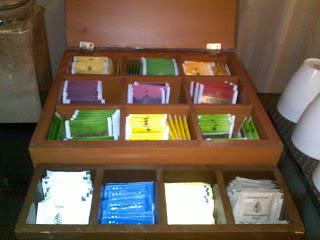 The many flavours of Chai 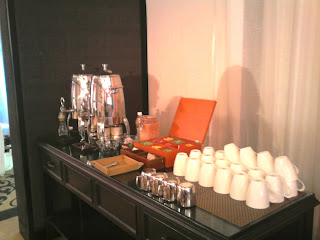 Sowmya's session got over and we weren't called in for our hair spa yet. The hair styling was taking too long and there were still about 10 more people who were to go in before us. There was no way we could get our hair done then so we were asked to write down our email addresses on a sheet of paper. A hair spa voucher would be mailed to us soon by Dove.. I hope I get it before Diwali !!
After a quick photo session (I don't have the official photos yet :( ), and receiving tshirts from the IndiBlogger team, we made our exit from the Pavilion (where the event was held) and went to San Qi, a restaurant in Four Seasons to meet my friend- the chef, Alisha! San Qi was beautiful, and the music there was completely mesmerising. Alisha was at work in her chef uniform and that's the first time I saw her in one. She looked just so cute!!! 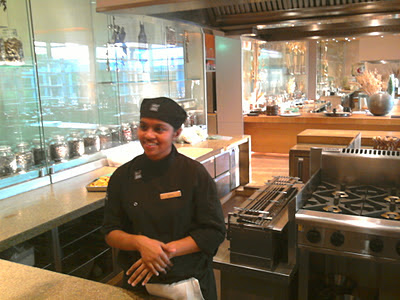 Chef Alisha! :D
After goofing around some more, we finally left Four Seasons to go to goof around someplace else :D 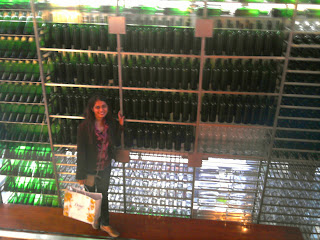 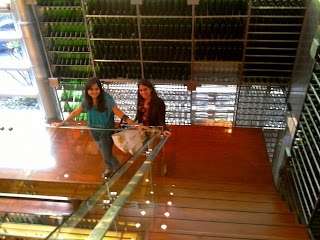 San Qi
It was a lovely Sunday.. thanks to Indiblogger & Dove! Waiting to get my hair treated, and to try the new products out. Psst.. have already tried the shampoo & conditioner. I love the smell (which is very important for me- more than the quality of the product sometimes :D). Anyway, it makes my hair feel soft but appear dry instead of shiny. Maybe the serum will help!! Will post my experience :)
Posted by Anubha at 10/23/2011 04:49:00 PM 4 comments:

Book Review: The Secret of the Nagas by Amish Tripathi

So, once you put down "The Immortals of Meluha" it is very hard for you to NOT start on the second book of the trilogy right away, as the second book starts from where the first ends- with Shiva rushing to save his beloved wife Sati.


Shiva now seeks revenge against the Naga warrior who kills his friend- the scientist Brahaspati. We stopped at Swadweep in Book 1. Here we take over from Swadweep, travel to Kashi & Branga before reaching Panchvati and stop in the Dandak forest of the Naga territory. So, in search of the Naga tribe, Shiva travels to the east of India while Sati is in Kashi with her newly born baby boy (Ganesha :)). Little does Shiva know that the sinister Naga warrior is somewhere around Kashi.


Who are the Nagas? Why are they stalking Sati and her family? Where do they stay?


The Nagas are believed to be evil people. They are creatures with deformed faces and belief has it, that this is owing to their sins of the past. They dress themselves with a hooded garment, and cover their faces too.


But have these people been always like this? And are the Chandravanshis evil too, as the Suryavanshis claim they are?


Shiva or the Neelkanth is known to be a "destroyer of evil". He is a human God that became a Mahadeva by virtue of his actions. Mahadevas don't lay down new ways of life like the Vishnus but instead, serve to heal the present one. Only with the removal of evil can a way be paved for the good to come, and Mahadevas do just that. But what exactly is evil? As we read the book, we see that there are no such things  as good and evil, but our own perceptions. Both are needed in some amounts to strike a balance.


The language of the book, though much better than the first one, still has a lot of phrases pushed in on purpose and hence do not blend very well with the rest of the book. There are a few things that amuse you- like the way the pandits radio-transmit their thoughts through temples, or the slangs they use in their conversation which cannot be imagined when the story has a backdrop set in that era. The author has beautifully woven facts into the story though, making you ponder over a lot of things in history. I love it when an author does that. I remember spending an entire day on Google looking up things like "The Priory of Sion" and "Mary Magdalene" after finishing with Dan Brown's "Da Vinci Code".


Anyway, this book will keep you engrossed and is guaranteed to leave you waiting for the last book of the trilogy! :)


Thanks Blogadda! (And extremely sorry about the delay :( )