so many questions unanswered,
some important and some frivolous ones,

scared of letting go and hoping against hope..
for a certain future,
where i can dream again..

This post is a part of the 'Shave or Crave' movement in association with BlogAdda.com

After having written a post on the "fairer" sex some time back (on whether the world is really "fair" to it), this is how it can actually make the members of the opposite sex dance to its tunes..

A lot of women like the clean shaven look to the stubble or a full beard. Personally, I am fond of a stubble.. I think it makes a man look rough and tough! :D However, for an occasional evening out to a classy French restaurant, I'd prefer him to don a clean look.. :)

But if I was challenged to get my guy to shave.. how would I do it? Hmm..

For one, I can make him read my post on what women have to go through to just go grocery shopping let alone meet a guy!!! Honestly, if women were to go without grooming at all, it'd attract a lot of judging eyes..

Secondly.. I'd take eons to dress up for an evening out with him.. would keep him waiting till he took some efforts too :)

Will un-mute every Gillette advertisement when we are watching television together.. so that he gets the hint :P

At the end of the day, if he still doesn't get the hint, then I'd pretend to like his well groomed friend better, and compliment his clean shaven look publicly! That should definitely scare the daylights out of him!! :D
Posted by Anubha at 12/22/2012 08:22:00 PM 2 comments:

today has got me thinking a lot about life .. and the way people function.

a lot of times i doubt myself (my heart).. i fear doing the wrong things and keep myself grounded even when i don't need to.

in this week, i came across two people (one of them just today!!) who completely changed the faith i have in people with regards to how much they are true to themselves. and i feel proud of myself that i am naturally tuned to listen to my heart and to follow my principles.. yet i doubt myself every second! (which causes all the trouble) how silly is that?

and i'm glad that in my real life too, i've always been surrounded with people who are just as strong and morally grounded..

i wish i could make peace with my past totally somehow though.. i wish everything seemed okay to my soul. i've discovered that the more you stay connected to your present, the easier it is to make peace with your past. i am trying just that but the mind keeps taking me back to the past and making me do things that are bothersome to not only me.. but to everyone else too!!! i don't wish to be the cause of anyone's unhappiness and yet i end up doing just that..

my crabby mood doesn't help my mom either - who's always trying to get me to help her with her errands or trying to talk to me about something important that goes on at her workplace. i don't like spoiling her mood because it in turn affects her health too but it all happens when my mind makes a trip to the past and makes me crazy.

P.S: Please treat this like a midnight journal entry and excuse bad punctuation & use of small case.

felt some courage after a long, long time today..

a walk (coupled with talks) from nariman point to churchgate,
having a friend over for tea and snacks,

i long for nothingness, 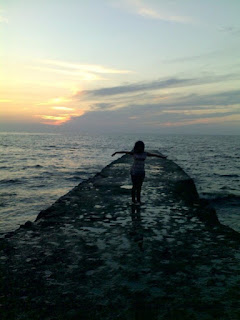 as nothing shall bring me peace..