I know it's not common to review a movie after nearly two decades of its release! But not a lot of movies make it to my 'favourites' list and it so happened that I watched it just recently. Though I end up liking / enjoying almost every movie I watch, there are some that I especially relate to, and "Runaway Bride" easily makes it to that list.

It aired on Romedy Now some time ago and honestly, when I checked the description, it seemed very cliche - "A reporter falls in love with a small town girl who is known as the Runaway Bride." My dad was watching it and the characters and dialogues kept me glued to it, despite the description. And I am glad I continued to watch.

The plot goes like this: A woman, Maggie (played by Julia Roberts), is infamous for leaving men at the altar, which earns her the title: the "Runaway Bride" in a little country side town in Maryland. She has left three men already and is about to marry a fourth one.

Ike (played by the very handsome Richard Gere) is a reporter in New York who wants to do a story on Maggie and chases the people she is friends with, chases all the men she has left at the altar and tries to find out more about her in the process. Eventually, after unsuccessfully trying to dampen all his attempts and efforts at this, Maggie decides to give in. She strikes a deal with Ike where she would help him with the story if he agrees to give her some money, buy a killer wedding dress for her upcoming wedding (to the fourth man) and help her have a grand wedding.

Such begins the story of Maggie and Ike, and many things unravel further as we see them fight, help each other out and slowly feel attracted to each other (though it's long before they realise that).

Other than just their chemistry in the movie (which I obviously adored), there were many subtle dialogues and scenes in the movie that I could relate to-

The part at the luau, where her friends and relatives (especially relatives and family friends) make jokes about her past "escapades" in their toasts, instead of saying something nice about her. Everyone of them has something to say about her tendency to leave men at weddings, and they decorate it in the form of jokes. Things like, "May the groom's heart be filled with hope...  and the bride's feet filled with lead." or "May the gifts be returnable" or "May the pitter-patter of little feet not be Maggie's."

Have noticed this about a lot of people, how they very creatively, and mostly in an unaware fashion, seem to pass remarks about people and their mistakes or habits that they judge as bad. And I have been the victim of many such remarks growing up. It's sad how people so comfortably dish out such "jokes".

Ike, undoubtedly, comes to her rescue with his toast that is intended to humiliate them for what they have said, but they very cleverly fill up the awkward silence that follows with dance and activity suggestions. Typical! And that's what I loved about the movie. They have shown a lot of scenes as they are, as they take place, in real life. 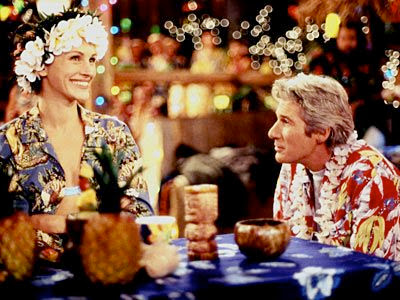 Then there are wonderful bits like these which I could relate to as well.. for one, the uncontrollable flirtations that Maggie projects at men, how many women have felt that they do this? We won't always admit it but haven't you ever found yourself losing control, not knowing why you're charming someone you don't even find attractive? 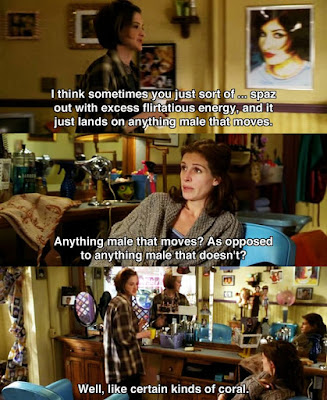 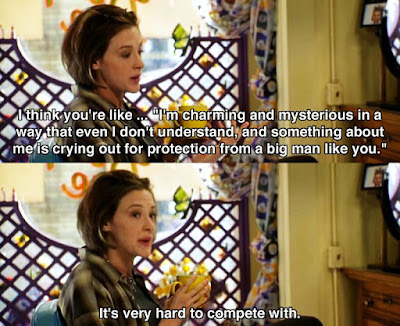 And then again, how many times have you not asked this question or thought this in  your head? I know I have!

So it's not just the realistic characters that make this movie likable. The dialogues, direction etc. are fantastic. Also, who doesn't love this grandma!! :D 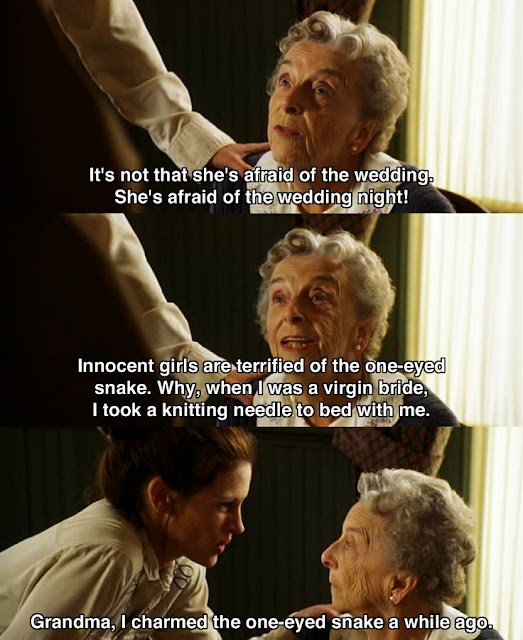 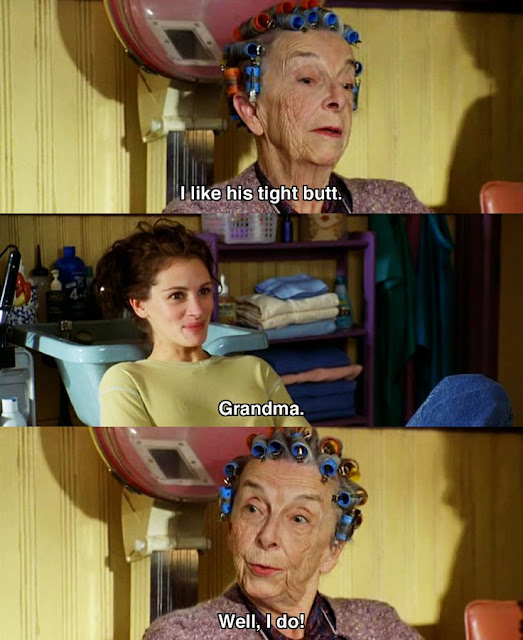 There's also the part where Ike tries to make Maggie see how lost she is, how she believes that what the man in her life wants is also what she wants. In his interviews, there is a question that Ike asks each one of the men that she has left - what kind of eggs does Maggie like? And it turns out that she always orders what the man orders. 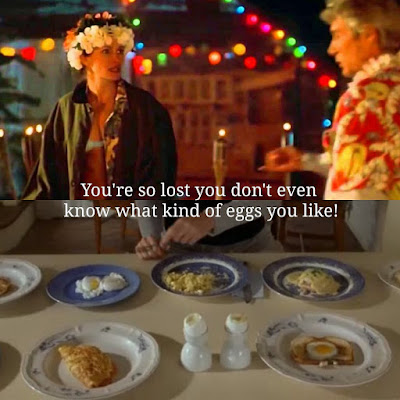 I thoroughly enjoyed this movie and it was so reassuring watching Maggie explore herself finally, trying to see who she is. I also loved all the tracks played throughout the movie, planning to download all of them though I am familiar with a few of them already. It was a perfect end to the movie for me when the credits were displayed and I heard Marc Anthony's voice after ages, pouring out his soul into "You Sang to Me".. :)

When I checked the ratings on IMDB later, I was really surprised not to see very high ratings but the reviews were also pretty strange considering the reviewers thought the movie was just like Pretty Woman, and most of the reviews were comparisons to Pretty Woman. I have seen Pretty Woman more than twice, and I must say, that other than the same lead characters (Richard Gere and Julia Roberts), and the fact that the movies have a common director (Gary Marshall), there is no commonality in the movies!! Both the movies are entirely different. You can't possibly compare. Also, I enjoyed this more than Pretty Woman. Would recommend watching this atleast once, especially women - I am sure you may find yourself in atleast one of the scenes, I had several "A ha" moments though!! :)