Had been to a tech fest today, some A.P. college near J.J. flyover.. walkin through the lanes of Mohammed Ali road was a real bad experience i must say !!
The fest was good enuf, i took part in coding, quiz and typing.. hopin 2 win in Typing & Quiz. The first prize is a Mickey Mehta's Gymn Voucher , dat too for a weight loss plan-- lose 8 kgs in 4 months..!! Wonder what i would do with that..
Anyways, I was tired by the end of the day and all i wished for was to go home as soon as possible, n relax with a warm cup of tea...

Towards the end of Mohammed Ali Road, as my friend and I were going back home on the motorbike, the vehicles had all halted in the middle section of the road and I saw something horrible ...
I had never seen something like this before..
An old lady, who had already lost one of her legs, had got run over by a vehicle, her other ONLY leg was bleeding ... it was smashed, the bones and nerves were out .. and she was actually picking it up with her hand .. !!! There was no feeling of pain on her face at all .... that was most surprising about her...
We couldnt stand seeing her for more than 2 seconds, and we went ahead in full speed ...
I got this lump in my throat for 2 minutes,
We were in that traumatic state for atleast 20 minutes...

All i kept thinkin on my way back home was..
Had those people who were trying to help her called an ambulance?
Will she be given proper treatment ?
What if she loses both her legs forever ?
She looked like she had no one to care for ... how would she live her life now ?

What is it when you never get bored of talking to someone ??

And you can never have enuff of them ?? 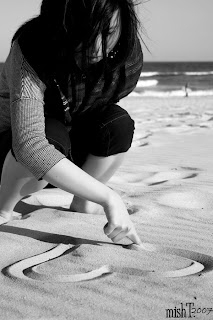 When you dream about spending all your time with them ....
Sharing each of your memories with them..

When their face comes to your mind automatically each time you hear a love song you're really fond of ..

When you see them in your dreams every night and actually pray you "shouldnt be dreaming of them tonight " just to drive away those thoughts ...

Mind vs Heart , the game has begun ,
Never ever thought I would fall into this again.
And I really Hope I don't go too far...

Keep prayin I come out of it time n again ,

Guess I have to start dealing with it rather than running away from it.

Takes a lot of guts, I must say.

Just help me deal with whatever comes my way ....

2008's here !!!
And its been nothing but a nuisance to me till date.
The last time i wrote was on ma bday.December 2007 was good as usualFull of parties, and meeting up with friends, and new people.Christmas time was the best ever this year.

Trouble started since the 1st of Jan 2008. Conflicts at home between my parents and me, guilt, fear, thoughts haunting me all day long.. lasted for a few days.

Then came my IT fest SPARK-IT 2008, and I was one of the OC (Organising Committee) members. It was on the 11th and the 12th of January.
I was in charge of the sponsorships, I was mainly handling one of the sponsors- CHIP magazine. We had a deal-- they would print an ad of our fest in their January issue and in return, we would give them 50 subscriptions from our side. They were ready to give us a 50% discount on the subscription cost. I already had so many names with me from the TYIT class and it was also made compulsory for the OC members, hence i agreed to the deal. I got the subscription rates on the day of the fest (11th jan).Once the fest was over, I went around the classes to collect money for the subscriptions and everyone refused to pay. I had TYIT students approaching me after class saying they gave their names out of fear of the professor who was in the class at that time.I was helpless. The CHIP guy is now like- "We can handle 45 subscriptions. If not that, we'll send you a bill of the Ad we printed and you'll have to pay us the same" Great !! I said..75000 bucks , gone down the drain ...Shud have thought of it before.. Donno wat's gonna happen now.

Was also down on health. I had got this infection on the thumb-toe of my left leg. I took it very lightly initially.Later a puss developed and it started spreading in the toe-nail.The pain was excruciating, I would wake up at 3 in the morning holding my toe tight and wishing it would stop paining. Antibiotics didnt help. Finally I had to be given anaesthesia , and my nail was extracted out. Its painless. But believe me, its not a good sight !! Just hoping my nail would grow back ASAP !Fever, cold, loose-motions followed, making it worse for me ..... :-(
Feelin much better now, but I'm really hoping everything sorts out soon.
Crappy New Year, and it's just the beginning.....