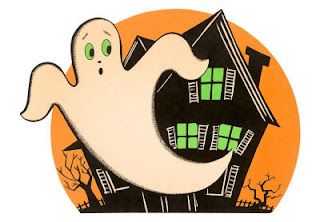 nd Simba starts sniffing the bedroom door and starts barking .. the same way that he does when someone comes to their place..
Now , if you think I bought that in one go, you're wrong..I thought they must be bluffing to scare me off , so I asked Aunty (their mom) if this was true..
She said she too didnt believe them at first but once when she herself heard the latch making so
much noise, she froze in fear !! I asked them if they did anything about it, and she said she did
perfom some ritual ("Havan" for those who understand) to drive away that spirit, but it didn't
work. Sometimes it also happens when their dad is not outdoors, but her dad hasn't experienced
anything of that sorts till date. Aunty says its maybe cuz uncle is a heavy sleeper, but its really
strange that he didnt experience it even ONCE.
Now they are so used to it that once my friend was sitting outside the bedroom, in the hall area, watching TV and talking on the phone ... she had worn this gold chain with a holy pendant .. and was taking rounds while talking... and when the clock struck 2.30, the latch started making noise, and she could hear some sobbing noise outside the bedroom, and her chain snapped off, the pendant went rolling over till the edge of the sofa, she ran to the bedroom, locked herself inside and went to sleep. Next day she saw the chain wasnt broken, it had been unlocked out of the S-shaped loop and its not very easy to take it out of the loop..I asked her why all of this is happening, and she told me that there used to live a mad lady in their
building, on the 6th floor (they live on the 2nd floor), and would take rounds on the terrace. The
children troubled her a lot cuz she was eccentric. She used to murmur stuff like ... "dekh lungi
sabko..." She died recently and hers wasnt a natural death. She was crossing the tracks and a train hit her, it was fatal.People in their society say they too have had experiences of her....
After they told me the whole thing, we made light jokes out of it, and kept pulling each others
legs, planning stuff on how we'll scare off the ghost away.. !! but when we went to sleep that night they made me wear that chain and kept the bedroom door locked (though her dad was at
home,why take chances!).. I also had my earphones ON and was listening to music on my phone
at the loudest volume so that I don't get to hear anything else !!! Thankfully nothing happened.
When I came back the next day, I told this to all of my friends, and also to my parents which led to a big discussion on spirits and how they come back if they have a wish that's unfulfilled.. It gave me creeps .. I tried sleeping on Sunday night, I had the bedsheet all over me , I hugged my mom and went to sleep.. To add to my fear, the next morning she asked me if someone rang the doorbell at 2 in the night, she wasnt sure if it was a dream or if it really happened...!!! Nothing really happened after that but every night I keep gettin scared every now and then ..
If you still think I'm stupid , then well, maybe I am .. but after that day I dont think I'll get up for a nature call post midnight !! :D
BTW: "Simba was extra sweet to me the next morning (Sunday morning)... I'm no longer scared of him :)"
Posted by Anubha at 7/24/2008 07:54:00 PM

oooh...this one freaked me out ...
GOSH !! how are they living there ..
i really cant imagine ..
window shuttering is ok but weird noises out side door .. thats really creepy ...

I pity the dog too :P

whoa!! scary...i'd have died of a heart attack the very first time such a thing happened...yur friend ad family are superb, i say :D :D :D

@arvind
i know, i'd have died when i heard it da first time !!

@alphabetworld
same here.. !!!! i really dont know how nothing happened to them

Oooooh!!!
This is so weird! I also don't believe in spirits and ghosts but now after reading this, I'm not so sure! :)

You are sure they weren't making stories to scare you???

I mean this is some Ghost who has its selected victims ;-) or may be it is seriously that "dekhk loongi aunty"


I don't belive in ghost or rather am not scared but me n my frenz did call some spirits it was fun but scary when the electricity went off we tried shooing the spirit & chanted hanuman chalisa & the next day we were ready to call anoth spirit :)

Nah! We have done that during mornings also. All u need is silence :)

well.. intruiging story.... seemed 2 be an episode from aahat !! lolz.. wel dey do exist..science does not believe dem bt I do.... cuz death is mysterious n science has an explanation of the physical phenomenon,,, it fails to go deep because there are no hard facts... hw many scientists wil believe a vision of sum1 dead explaining death !!
To dose brave few....cheers.. n 2 oders who believe n r scared,, God Bless Al yaar !!!
nice post again Anubis !! [;)] COINCIDENCE Or Not- Anubha, Anubis is da Egyptian God of the Afterlife ! lolz....... kewl nick [;)] !!! cheerios,,, keep posting !!!