Yes, here's one more article about it again. Please don't stop reading. I am sorry. I am just so sick of it that I had to write about it !! It has become the talk of the nation, it has taken the whole city by storm; wherever I go I hear people talking about it!!
I get atleast 2 mails about it everyday. It was also a Trending Topic on Twitter last week !
I see people wearing masks ALL THE TIME so much so that, the other day, when my brother went to the Dentist's for an RC, the dentist confessed he had a hard time getting a mask for himself, it seems they were all out of stock !!! I see people making good business selling all kinds of swine flu masks outside Andheri station everyday. It's good to take precautions but some have turned into hypochondriacs.
A Tweet I Read :-D
90 people get swine flu n d whole world wants to wear surgical masks..20 million people have AIDS n still nobody wants 2 wear a condom...y??
One of my friends who travels to college by train everyday had just recovered from viral fever and had a mild sore throat. She was waiting to alight the train at Nerul and happened to cough just then. People moved away from her that instant and rushed to the other exits in the train leaving her all alone at that door! The co-passengers seated in the compartment scorned at her as if to say "One more time and you're out of here!"
Schools and colleges have been shut down. If the virus is so contagious, it's going to spread anyway! How will shutting down institutions help? And for how long can they remain shut? It wouldn't be a surprise if the entire city shuts down in the days to come.
Media can sometimes be so misleading. They've started reporting Swine Flu deaths without highlighting the other complications that those individuals suffered from. Research
Precautions are always good, it's also nice that we keep each other informed via mails or tweets if we come across any news about this, but guys, we also need to think practically sometimes. Remember we're known to resume work the next day the city was bombed- twice!! We can't just sit at home fearing we'll catch the disease. It's okay to feel worried, we're human, but let's just try to be a little practical, and a little more braver. :-) 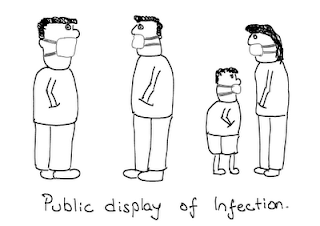 What scares me is when I think about kids! I mean, khelne kudne ki oomar mein, they already see Terrorism, face high competiton, busy studying and attending "extracurricular activities" from falan-to-dhikna n wat not...n now, they have to wear masks? simply stupid!

Well, I want to know more about remedies and let everyone know..gud u gave me sumthin to digg up! Nice Post as always! ;)

Perhaps the best Swine Flu article I read in a looooong time :)
hats off. And loved that Tweet about AIDS n condoms! How true!

very gud n down to earth article about effects of swine flu in the society ...

i can understand ur friend must have had a horrible time after dat ...


When Mexico was faced with the same problem of epidemics( different kind of flu), they had followed the system of bandh ( closing all the shops, schools n colleges n outside places and informing ppl to be residing in their homes) for whole week. There were successful in their attempt.

I am not sure in India, just closing the schools ,colleges n mails would be enuff to eradicate it completely. We may go the mexico way if its not stopped.

Doctors say this kind of swine flu epidemic will die only at the time of summer bcoz the virus dies due to heat.

@JD
I know what you mean. A colleague in my office had come to work with his eyes all red (he hadn't slept well the previous night), and was sneezing every hour (which he normally does anyway). He was suspected of having swine flu and sent home !! :D

Well, I don't think closing down institutions helps. We know it's curable, we know the remedies, then why worry? How long will shutting down schools and colleges help? It'll only affect the economy of the nation eventually. I think they're making a hype of it unnecessarily. It's good to share information and be prepared for it. It's however not practical to sit at home and be afraid of it.

Thanks for visiting my blog :)

Really nice post dear but some facts about swine flu.

1. It takes 48 hours to carry out a test to detect swine flu.

2. In Mumbai, on an average testing centers get 100 samples everyday outta which only 40 can be tested in a day.

3. All of us know that if Swine flu not detected in time can be fatal. It rapidly affects the lungs.

4. Malaria and Pneumonia are fatal diseases but not as fast as Swine flu.

5. Swine takes more than 48 hours to detect and takes less than 48 to take you to hell.

6. Apart from tablets there is no injection developed. Tablets if taken as precautionary measure will turn your body immune when you are actually struck with Swine Flu.

So, on the whole I do not blame the city for the chaos and panic. All of us have dreams and very little time to achieve it. So if your struck with anything like Swine Flu forget your dreams your life goes for a toss. However, I agree that Swine Flu is hyped after all Yeh hai Mumbau Meri Jaan.

In current scenario , catching cold is as good as being H1N1 infected !! :-P

@Calvin
Swine flu maybe faster than Malaria and Pneumonia but it's curable and not fatal at all!
There are chances you've already had swine flu and have been been cured of it but you still don't know about it! :D
Anyway, I do agree with what you have to say to an extent, but I'm really tired with the whole city getting so worked up about it. There's nothing else people talk about!!!

the incident reminds me of this cartoon
http://www.shoutmeloud.com/wp-content/uploads/2009/05/winnie-pooh-swine-flu-joke.jpg

Hello. Facebook takes a [url=http://www.casino-online.gd]free casino bonus[/url] wager side with on 888 casino sell: Facebook is expanding its efforts to institute real-money gaming to millions of British users after announcing a wrestle with with the online gambling toss 888 Holdings.And Bye.