So, we reached Haridwar on the 27th of July and went straight to "Vyas Mandir" where we were supposed to stay. It's our community temple and there were some festivities going on there which were supposed to last till the end of the month. My uncle (my cousin Rohini's dad) was there two days before we could reach Haridwar and he was staying in the temple's ashram rooms too. We just rested in our room that day and went for a walk to explore the place a little bit, then sat for the aarti in the temple there before having dinner and retiring for the day. We were supposed to be in Haridwar till the 31st of July. We made plans to go to Mussoorie and Rishikesh during our stay there and we would always come back to Haridwar after visiting those places, meaning we never spent the night elsewhere though I wanted to- in Mussoorie! The place was so beautiful! Anyway, more on that later...


We went to Mussoorie the next day i.e. on the 28th of July- you'll read about it in the next part of this travelogue. :) 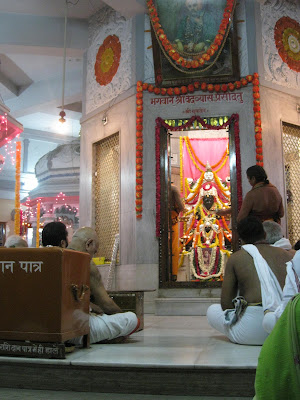 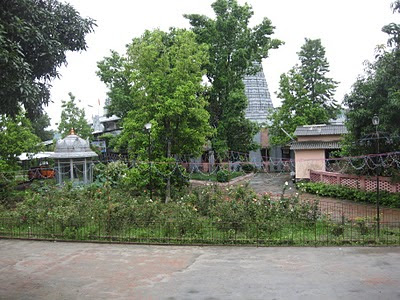 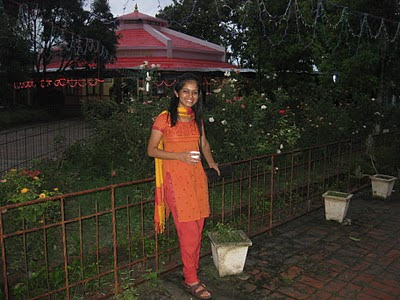 Yours truly having tea. :)

On the 29th of July, my cousin Rohini and I went to this place called "Hari ki Pauri". The banks of the river Ganga are called that. There are cable-cars from "Hari ki Pauri" that take you to "Chandi Devi" and "Mansa Devi"- two very well-known temples there. I had never travelled by the rope-way before and was filled with excitement! We bought a combined ticket of INR 165 for "Chandi Devi" and "Mansa Devi" temples. There are buses that take you to the point from where you board the cable-cars. We were all allotted a bus number and we had to wait for our bus to get filled by people who shared the number with us. After half an hour of waiting and finally boarding the bus, it took us twenty more minutes to get to the cable-cars. And as expected, there was a queue for the cable-cars too. It wasn't very long though and we waited patiently. The ropeway was fun! It wasn't scary at all as I thought it'd be and we kept waving at others in cable-cars who were going back like a little bunch of kids. :D 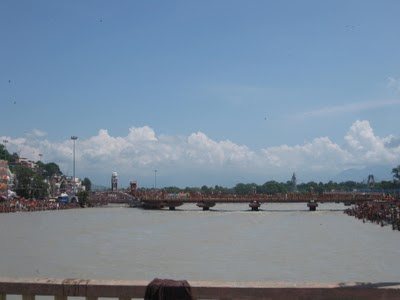 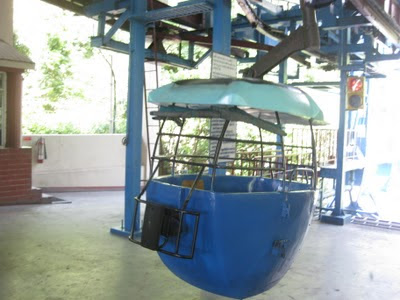 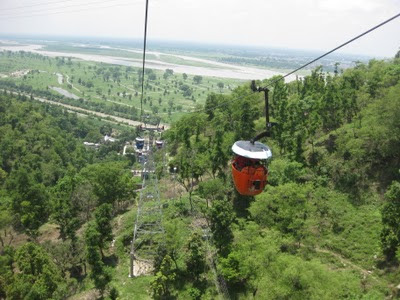 We finally reached "Chandi Devi" after 10 minutes in the cable-car and had to climb a few stairs more. We had taken some offerings for the Devi (Goddess) which would be returned to us as prasad later. There was a small queue even for entering the temple and by then it seemed like God was really testing our patience! Oddly, I didn't feel a thing once I got there. The temple seemed to have lost its sanctity with so many people hurrying to get inside and struggling to get a glimpse of the Goddess. I didn't feel a sense of peace at all. Some tied a sacred thread to the temple pillars promising to come back and untie it if they get what they wished for. I did admire these people for the faith they had. Lack of faith is not a very good thing but I keep suffering from it every now and then. Anyway, that's another issue altogether. We got our offerings back as prasad after being blessed and we made our way out. We had also bought something to feed the monkeys as we had been told there were a lot of monkeys outside the temple. And sure enough, there was a troop of monkeys waiting outside eyeing our bag of prasad! We kept our prasad safely inside and fed them with grams and sugar balls that we had got for them. 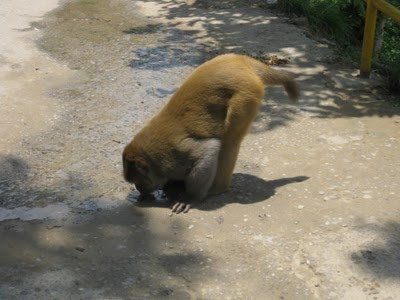 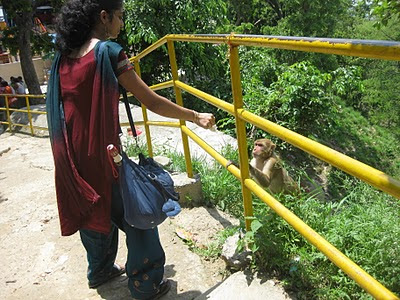 Rohini feeding one.
We took the ropeway down (again after standing in a queue again for it of course) and waited for our bus to take us back to Hari ki Pauri.


Next was "Mansa Devi". There was a ropeway straight from "Hari ki Pauri" to "Mansa Devi". We didn't need another bus to take us anywhere. The queue here was however too long and we spent more than half an hour waiting to board a cable car. At this point, all I wanted to do was to go back to our room and lie flat on my back. I was exhausted! The view from the cable car here was breathtaking though. We could see Hari ki Pauri from the top and it looked beautiful : 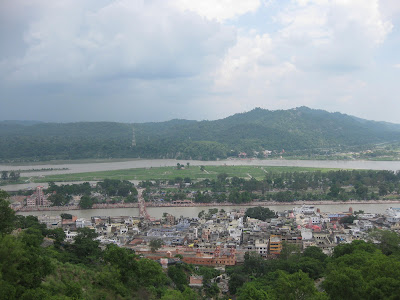 As soon as we got to the temple and were done with praying, we rushed to the cable car zone to go back, only to see that the queue here would take another 45 minutes to move ahead. There was an alternative of climbing down the steps here though and we decided to do that instead. However, each step was so high that my knees started to give up and I had to sit down for a bit after every five minutes. We finally got back to "Hari ki Pauri" in twenty minutes and rushed to find an auto that'd take us back to "Vyas Mandir" (to our room). We felt hungry on our way and decided to stop at a dhaba first. After a nice lunch of roti and paneer with chhaas to top it all, we finally went back to our room.


My uncle and our family pundit were planning to go to "Hari ki Pauri" in the evening with us for the Ganga Aarti. So after resting a bit, we left with them to go to "Hari ki Pauri" again. There were a lot of kaavadias in the evening there. Kaavadias are people that belong to the "Kaavad" tribe. These are worshippers of the Lord Shiva. In the month of Shravan, which is considered to be a sacred month in Hinduism, over five lakh of these saffron clad kavadias throng to Haridwar from Himachal, Haryana, Punjab and all over the North with kaavads (a wooden or bamboo stick with pots at either end) to fill their pots with Ganga Jal (water from the Ganges). They take these pots back to their hometown and offer it at the local Shiva temple there. They sing hymns and holy songs while they trek. They can get annoying sometimes though when they try to get their way with almost anything in the name of God. Most of these kavadias build tents around the Ganges and stay there through the duration of this auspicious rally. 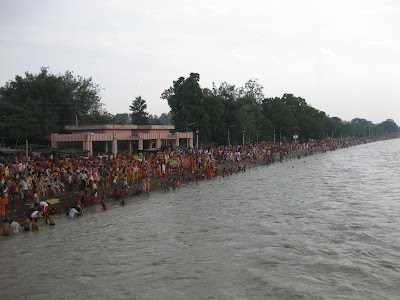 Hari ki Pauri in the evening with kavadias on the bank. 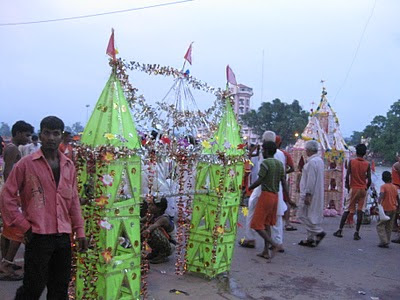 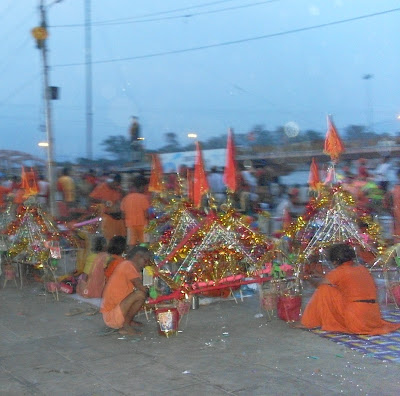 Some kavadias with their Kaavads. 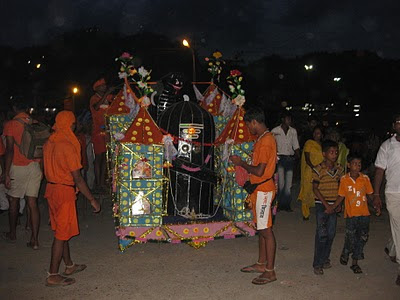 The most decorated Kaavad.
I also spotted an Aghori baba there but was too scared to capture him. Aghoris are people who eat dead bodies of people. After these bodies are immersed in the waters of the Ganga, Aghoris feed on them. They don't kill, but the fact that they eat human flesh and live and dress weirdly is reason enough to be scared of them. I have googled the following image just to show you what they look like. The grey colour that you see is ash that they smear on their bodies. These people are also worshippers of the Lord Shiva. 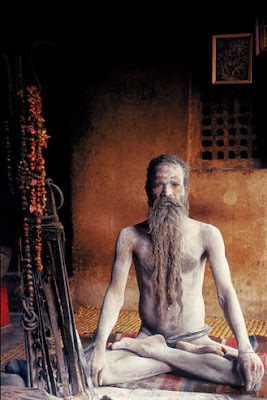 We headed for the Ganga Aarti from there. It was beautiful and takes place daily at 7pm sharp.
Here are a couple of videos of it:

We later made some offerings (flowers and diya) to the Ganges and dipped our hands and feet into it. They say your sins get washed off if you bathe in the waters of the Ganga. Dipping hands and feet also counts I'm hoping! I don't think I have sinned much to dive in! :D Anyway, we look stupid towards the end of the video as we thought that the family pundit (who was recording) was clicking our picture and that he had stopped recording long ago, but he hadn't!

Haridwar is known for gemstones and my cousin is fond of them, so we spent one hour at the gemstone shop there while she shopped to her heart's content. :) After some chaai and mango shake, we headed back to "Vyas Mandir".


The next day i.e. the 30th of July was half spent at the temple and at Rishikesh- an account of which I'll share in the parts to come! :)


On the last day of our stay in Haridwar i.e. 31st July, we visited all possible temples there. Haridwar is mostly known for it's religious significance. The temples here are beautiful, but I could not find the peace that I was looking for except for in Ram Mandir maybe but there too, the kavadias came in just after we entered and broke the silence.


Also, we faced a lot of eve-teasing in Haridwar with random people asking us if we wanted a lift and cracking dirty jokes to embarrass us. And the people that we came across with seemed to belong to a different clan altogether. In one of those Vaishnodevi replicas that they have made, I slipped and fell in the make-believe cave they had made and then followed a burst of laughter instead of anyone asking me if I was alright or lending me a hand. I was annoyed!


So, anyway, as I said, the temples have been beautifully made. 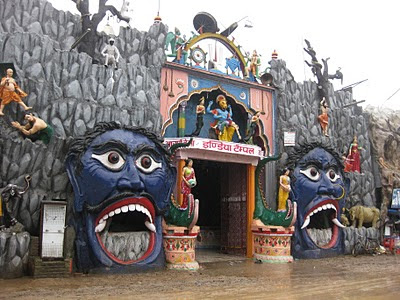 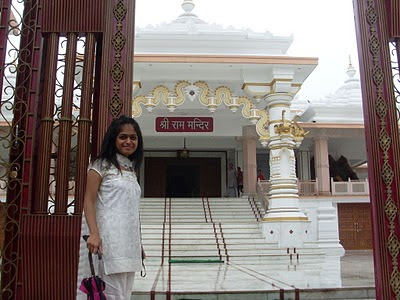 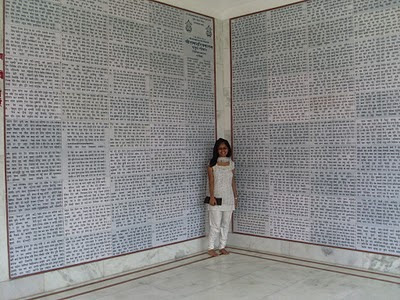 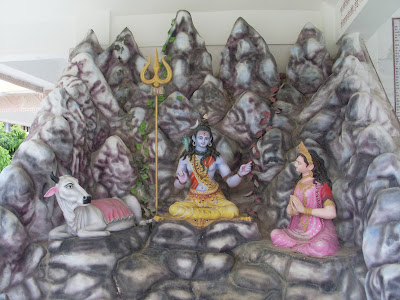 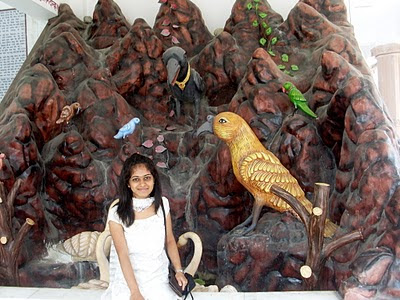 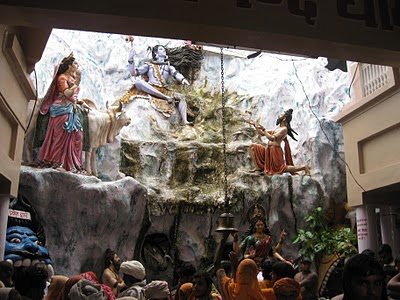 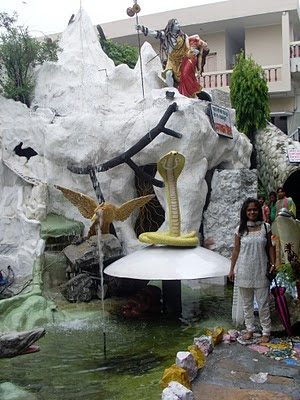 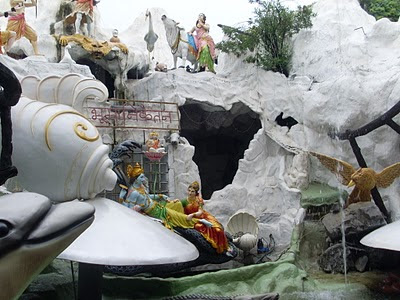 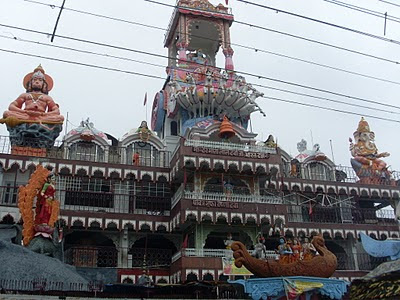 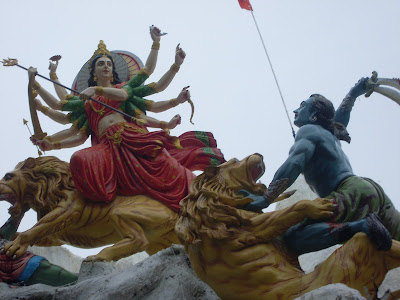 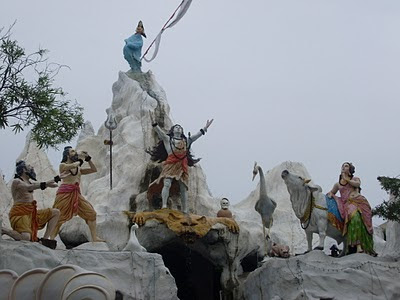 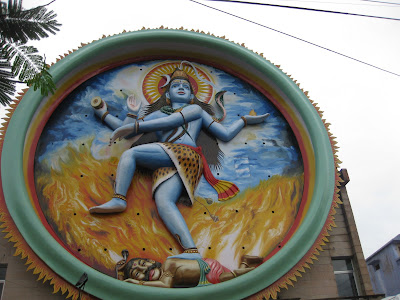 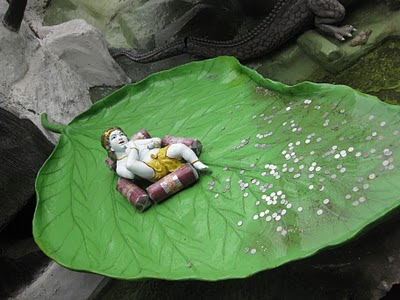 There is a huge Shiva statue near Hari ki Pauri which is very prominent once you enter Haridwar city : 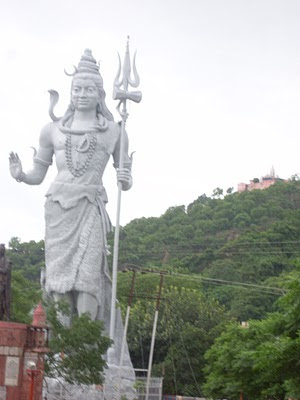 The next day, i.e. the 1st of August, we left Haridwar at 4:30 am in the morning to go to Delhi. Will write more about Delhi in the coming parts too.


So, Haridwar is a nice place to visit if you're a religious person. It does have a lot of scenic beauty but there are more of temples here than monuments, parks and the like. Anyway, even with some bad moments that we had, we enjoyed the adventure! :)

wow.. amazing pictures man... you too have a photographer in you! :)

An awesome place ... wish like going there again and again ... :) .. The environment in the very morning is just inexplicable ... The whole "Haridwaar" and "Hrishikesh" is marked by an array of marked areas ... :D :D :D ..

you look awesome in that orange suit and picture of "aghori baba" is superb!

@Harsh
You've been there? The environment in the mornings is very peaceful :) And hey, it's called "Hari ki pauri" too...

@Sakhi
Thank you sooo much! :)

Anubha,nicely written.U made my previous visits to to these places come live again to my mind.

Enjoyed reading the travelogue. I haven't been to Haridwar, plan to sometime soon. While the Kaavadias can be testing at times, many times they are, it takes a lot of faith to actually make the journeys they do.

Before many of the religious places became overtly commercial on account of the commercial class spotting opportunities to make money, these places used to be serene, and retained the ethos of communities that first built the temples in olden times. With just about every kind of person making a beeline for these places for the living to be made off pilgrims, a certain sense of sanctity is invariably lost.

The sight from above appears to be beautiful.

Well..UP/Uttarakhand are one of the worst places of eve teasing. No religious places..If I go ever it would be for photography purposes..I just hate all this show business and crowd and fanaticism.

What a wonderful images? I like images very much because its clarity is very nice...