Being Gay in India

Just the other day, I saw a deal on SoSasta that let you have unlimited scoops of ice-cream at Hokey Pokey (a franchise ice-cream parlour). They have an outlet at Bandra West, and since my friend Alisha & I were there after our self defense class, I suggested we buy the deal and get the vouchers during our next session, so we can have some ice-cream after sweating ourselves out in class. She told me the deal was for a couple and we couldn't avail of it. I said we were a couple already- "Two" of us made a couple. She went on to say it has to be 2 members of the opposite sex. I thought that was pretty biased. What if we were a lesbian couple wanting to avail of the deal? So on our way back, we rehearsed what we would say if we happen to go to Hokey Pokey and claim for our unlimited scoops. We spoke of suing them, fighting for our rights, stressing on section 377 and everything else that could get us those scoops. But I noticed one thing. No matter how educated we are, how much ever modernised or broadminded we call ourselves, we couldn't help but giggle after rehearsing every one of those acts. Like the idea humoured us somehow.


So, when I read about this blogging contest on Gaylaxy Magazine, I was tempted to write about what I thought of homosexuality in India.


When I was a kid, I didn't even know gays exist. I didn't know that it was possible for two members of the same sex to fall in love or engage in sexual intercourse. These things were always kept hidden from us just because the society felt homosexuals weren't normal human beings, and that homosexuality was a taboo. For some, a sin! Frankly, I got exposed to this concept in the sixth grade from watching F.R.I.E.N.D.S. (when Ross gets divorced for the first time because his wife Carol is a lesbian). I went to an all girls' school and as I grew up, I learnt of bisexuals too. There were girls in my school who other students & teachers said were lesbians, and they were made fun of, or avoided. During our sex education sessions, this area was never touched/discussed. Also, it was embarrassing to stand up and ask a question about homosexuality considering it was looked down upon. And we dare not ask such questions to our parents or other respectable elders of the family due to fear of getting scolded or punished. Even after seven years now, after the High court struck down the Section 377 provision two years back, after homosexuality was portrayed in movies (although after a lot of struggle with the censor board), homosexuality is still not accepted wholly in India.


Parents still expect their kids to find a match for themselves from the opposite sex, so that they can start a family and lead a 'normal' life. We see such an example in the Bollywood movie Fashion where Rahul Arora (played by Samir Soni), a gay fashion designer gets married to his female best friend to keep his mother happy, but continues to date his boyfriend post marriage. A lot of homosexuals are pressurised by their families this way but they don't realise what they are doing to the person and consequently to his/her partner. Of course, reproduction is impossible without two heterosexual individuals of the opposite sex, and that's the only way the blood line can be kept alive, but these people can't change the way they feel. They just aren't built that way.
Trying to change them will destroy them. It already takes a lot of courage for them to admit their sexuality to themselves and to their near ones. Forcing them to change or live differently will hamper their growth, and the depression caused might lead them to even take their lives.


Even as I write this, I admit I feel a little different around gay people. I'd probably be okay with a gay friend but I might tell the world I have a gay friend just to see how they react or just to prove I am okay with having a gay friend even though internally I feel different around him/her. I guess time and experience will help me accept it. The rest of India? That might probably take a century! 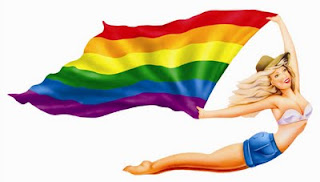 well written post. I have never come in contact with a gay person..i.e. someone who has disclosed to the world..so I still dont know how will I react. But one thing I believe and follow very much is live and let live

Wow very well written :D I had a Gay friend though he never admitted it so openly but i definitely got it confirmed that he was gay. And i was very welcoming and accepting, it was just how he was. I just found it natural except under certain instances when things were like little funny for me. But still it was his choice and his happiness that matters to me. And i Hope everybody just accept ppl as what they are.

Well written... definitely its a personal choice regarding preference and we should be sensitive towards them..

But there is also a different aspect to it...more so in India cause they are not accepted openly..Because of the acceptance issue, these people try to curb their feelings...but at times they cant and then they start moving towards a desperate phase...guys travelling in local trains would have surely seen or experienced a few incidents..and when someone comes across gays who have become desperate it further fuels the hate attitude towards them...in a way its a vicious circle...

If you ask most Indians they would sum it up as "I totally believe in gays having equal rights and more acceptance in society, but only if that person stays clear of me"

I remember an incident I was told by someone that a son of their friend was married to a girl by the usual arranged marriage procedure. Only when the couple went on a honeymoon that they discovered that the girl was a lesbian. They came back but couldn't tell their parents clearly what the problem was. It was a little later that observing their behavior the mother of the son probed in and discovered this. She urged them to separate on the basis of the girl 'not being normal'. This is so absolufreakingly weird! Not terming this as normal is totally wrong because it is what someone is born with and does not have a choice. When will people ever understand to stop judging others on the basis of something they were just born with and never had a choice to make?

Loved the way u have written the post. (your writing has matured a lot :) )

And as for how I feel about any sexual orientation, well, i think its none of my business about how a person feels sexually. They have their rights. :)

Hi,
i have just started reading ur blogs....
i realized that u r very clear abt ur thoughts & ur approach to see things and u don't hesitate to explain your opinion to the world.
hats up for carrying such a sensitive topic very well throughout your blog.
Heartiest congrats && best wishes for the future!!!

@Reema
Thank you! I had come in contact with a gay person once who seemed completely normal to me, unlike some gays who even dress that way. I don't have gay friends though. Yes, that's a good policy to follow (live and let live) :) But it'll be a long time till India adopts it!

@Reeti
Thanks. Wow I am impressed that you took it so well. I still don't know how I would react on having a friend who I later find out is gay. It's not about finding out later, it's about his/her sexuality. I wouldn't be too comfortable with it honestly but wouldn't judge him/her either. It'd take time for me to accept that friend again. You never know.. I've never had such an experience so all these are just what I think I'll feel! Anyway, yes, rightly said, everyone should accept people as what they are! It's sad that a majority of people don't.. :(

@Rohan
Hmm, thanks.. yes I too wonder why some gays behave that way. As if they want to embarrass others! I think those gays lack respect for themselves. It's only when you accept yourself can you be accepted by others. Self acceptance is hard for gay people. Once self acceptance comes, self respect should follow.

I too don't like it when they wear their sexuality on their sleeve for no reason but for enjoyment & to purposely humiliate others in public. It's very strange.

@Anonymous
Thank you. That incident was shocking indeed! But, you know, with parents like those, you can't really blame the girl for not telling her parents earlier. But she could have told the guy before getting engaged or something. He could have easily rejected her (considering it was an arranged marriage) stating some other reason (if the girl wanted to keep it hidden from the families). This way, she ruined her partner's life as well as hers. Not to mention the parents'!

People (atleast of the generation before us) will take eons to understand that some people are born with it and it's a normal thing for them. But you know, even they can't be blamed for being brought up that way. I was exposed to the concept of homosexuality in secondary school while they must have never gotten exposed to it till college or much later. They must have been made to believe it's a taboo. So it'll take time for them to move with the times.. They should atleast be "willing" to accept.

@Sakhi
Thanks dear! Matured? Really? :) Thanks!!! I hope that's a good thing.. though I do miss my teenage self. My blog posts were so happy-happy then! :)

And yes, like Reema said, "Live and let live". So we must mind our own business! :)

@Prasad
Hey Prasad, I am glad you liked reading my blog. You're welcome here!!! :) I am not really clear about ALL my thoughts. I am a very confused person that way :D But yes, there are a few things I strongly believe in! :) Thanks a lot for the "hats up" and for your good wishes. Do keep visiting :) You made my day! ;)

Hi Anubha,
Thanks for the warm welcome!!
I feel as the name suggests 'Anubha' you are an unique person with great personality with full of creative & positive thoughts...
I have also posted new blog 'Everyday I stood there at 9 (poem)' please read it && give your valuable comments thanks in advance
Take care