I am getting a lot of "me" time these days..and I am quite liking it. Today I had a nice long shower before sitting down to work. In between talking to mom, making myself some tea and working, I was also listening to these tracks from Sex & the City (the movie). I can't help but sway to the beats of "Let's hear it for New York!". That track is called "Empire State of Mind" by the way. Who would think, right? I had heard the song but it took Chinky & me about 2 hours yesterday to figure out what the title was..they could have just named it "Let's hear it for New York" than "Empire State of Mind". How silly of them!

I tripped on this number when I was searching for "Let's hear it for New York!". It's quite nice, isn't it?

I got hooked on to this track ever since I heard it at the jam session, and saw guys dancing freestyle & b-boying on it :)
Also painted hearts on my nails a while back :P 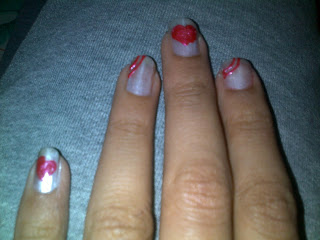