This post was written on the 22nd of March when I was on my way to Bombay (in the train). Could not post it at the time due to connectivity issues. I am already back to Hyd now :D
It has been a while since I last wrote. I don’t even know whether I should be calling this Project 366 anymore. But I’m not yet ready to call it off. Still trying to post as and when I get to. Sometimes, I do have the time but my eyes get too tired of the computer. Or I am too sleepy to even press a key. Other times, I feel like cuddling up with a good book atleast for 10 minutes before I can sleep. Or watch an episode of “2 Broke Girls” to laugh a little. I want to be dedicated to the project but making it an everyday activity can sometimes turn it into a ‘task’. On days that you are tired that is. I am still writing though- for different things.
Life in Hyderabad hasn’t been all that good. But I do have some interesting experiences to share!
I moved into a hostel on the 12th of March. The hostel food sucks, I am paying more than what the services are worth for, and no one except the warden can speak Hindi (broken, but comprehensive). On the other hand, my room-mate is friendly and the room is quite spacious. You cannot have everything you want, can you? I am still on the lookout for good places to stay that are closer to where I work and are spacious. But now that I have bonded with my room-mate fairly well, it might make the moving harder. I might try to get her to move in with me too.  Let’s see.


Shopping is so much fun when you are alone. Never knew shopping for bedsheets would be as exciting as shopping for clothes is. I ended up spending too much on them and then felt guilty about it later. I took pictures of one of them so just tell me how beautiful you think it is (even if you don’t think so). That will rid me of the guilt :P 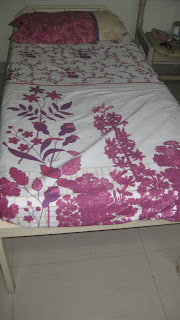 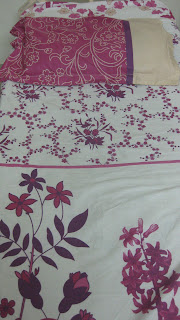 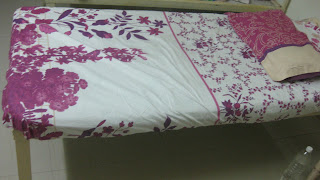 I will upload pictures (or a video) of the room later (when it’s cleaner :P). We have roaches in our room and are going to call the pest control people next week. One more reason why I’m still looking for better places!!


As I said before, I am not too happy with the food here. Nowhere do they serve chapaati the way we make it. I always thought “rotis” or “chapaatis” were made of wheat. You rarely get a roti that’s made of wheat here and I long for it. They use “maida” everywhere. Probably because it’s cheap. Little do they understand that it’s bad for your body and doesn’t digest easily. Or maybe they do understand but couldn’t care less to do anything about it. We aren’t allowed to cook in the hostel, and the ‘rotis’ you get outside at local curry points are all made of “maida” too. That leaves you just with one option – rice. And given the fact that I am putting on weight, having two rice meals in a day isn’t helping at all. Also, the subzi (vegetable) is too spicy.


The trouble with finding good food led Nissim and I to try cooking. Nissim is the friend I was staying with before I could move in here. He has a proper house with a well setup kitchen. So this one time, when I was at his place for dinner, we decided to cook some rice and dal ourselves. We called up his mother for help with cooking the rice and dal. And when it was time to give some ‘tadka’ to the dal, I tried calling my mom up. She wouldn’t answer the phone and eventually, I called my friend Aditi. Her mom answered and helped me with it. Somehow, even with her clear instructions, I managed to burn the curry leaves & cumin seeds. The dal was still edible though. Actually, more than just edible. It was tasty! The papad was prepared in the microwave, and we had some pickle at home. 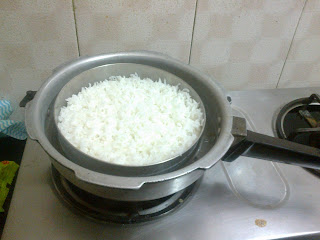 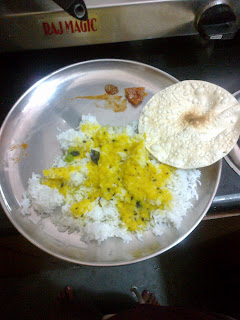 I also stayed over once and there was nothing for breakfast so I tried boiling eggs with the help of JD & my friend Chinky's mom over the phone. And they turned out pretty well :) 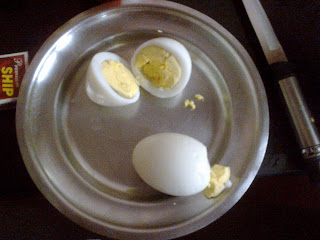 The next time I go to his place for dinner, I am going to try “chapaatis”. I can make a lot of them twice every week and take them to the hostel. :D
I found a nice place (Chowpatti – Platters) that served good North Indian, West Indian and East Indian food at City Centre. It’s a mall there. The first time I went there, I was so happy and hungry that I gobbled up everything. Only halfway through the meal, I realised I could’ve taken a picture. I did anyway: 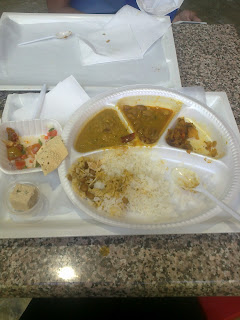 The next time I went there, I made sure I took a good shot before I could start eating: 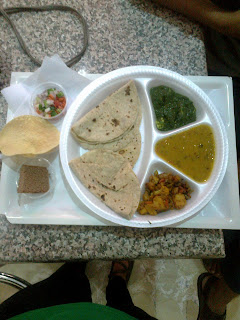 Delicious, no?
There are a lot of malls around here- GVK One being the grandest of them all. But somehow, I like City Centre better. It isn’t so posh looking as GVK One but it has everything you need. The food, wide variety of body products (love 'em!), good stationery at Crossword (awesome craft products at Crossword of all places!! I knew they stocked stationery, but craft???), good shops that don’t burn a hole in your pocket.
Almost everything is too expensive in Hyderabad. The auto drivers refuse to go by the meter (except for the occasional honest ones) and charge you any price they think they’d get. Eating is expensive too. The Frankie you get in Bombay starts at Rs. 12 while the one here starts at Rs. 35 ATLEAST. I don’t have many options to eat around my workplace. There is a Frankie place called “Roll Call” and a Subway. Not being particularly fond of Subway, I eat at the Roll place sometimes. One veg roll costs you Rs. 45 and it’s not even that tasty. It’s so spicy that you get full just by drinking water. So I either have to pack my hostel food for lunch or get something from the local curry point which again is either “maida roti” or “rice”.
Parlours are expensive too. I wouldn’t get into the details of it but I was shocked at how steep the rates were- more than double of what they are in Bombay!!
You would think Bombay is more expensive- it being the city of "dreams" and all.. but trust me, other than land & rent, everything is dirt cheap in Bombay – unless you’re the kinds who prefers living life in total luxury.
One thing I found cheap was Naariyal Paani (Coconut Water). I had one for ten rupees the other day and told my room-mate about it. I told her I was happy and didn’t mind having one everyday. She said ten rupees for a coconut is expensive. People bargain for five to six rupees it seems. That is way too cheap. You get one for 22-25 INR here (Bombay).
One good thing is they don’t give you plastic cups at tea stalls here. They serve tea in recyclable paper cups but they are way too tiny!! :( They don’t serve tea in glasses strangely but I think that just makes it more hygienic. I have an emotional thing with having tea in chai glasses though.
Also, tea is consumed a lot more than coffee. You would think since it's the South of India, filter coffee is easily available. But strangely, it isn't. Even most tea points don't make coffee like they do in Bombay.
Coming back to malls, GVK-One has Hard Rock Cafe – one good place I enjoyed at last weekend. I have never been to the HRC in Bombay yet, strangely. I thought the place would be a little too loud for me. But I loved the music AND the company. Remember the nice people I had mentioned last time- one of whose birthday it was and I had gone to their place for dinner? I went out with them, the girl’s dad, Nissim and one more person. I enjoyed myself thoroughly. It’s too bad that it was their second last day in Hyderabad. Why do things end when they are just starting to get better?
Anyway, so HRC was fun. Amongst all the madness, the DJ played the song I requested for and he was especially happy when I went over to thank him personally. The atmosphere was joyous. The “Saturday night” effect perhaps.
So my last weekend (18th-19th) was quite eventful. Was working on Saturday and then went to HRC. On Sunday, I went for a movie “Kahaani” with an old friend and later during the day, caught up with some Twitterers at a Bombay tweetup I had organised :D The movie was good even though I had accidentally read the climax somewhere.
So, by now, I think I have summed up what I feel about the place. Work keeps me occupied. The rest of it isn’t very enjoyable but I am somehow pulling myself along. Let’s see how it goes.
Right now, I am on my way to Bombay- for three whole days!! :) Okay, almost three. Train journeys are fun. Waiting to catch up with my friends again.

Living away from home teaches oneself a lot of things and its good for self development. You will soon learn cooking and you will feel so proud..trust me!