For a Friend's Life

Just finished watching a movie "Return to Paradise" (1998) on Zee studio , that left me in a maze of thoughts..
Its about 3 friends- Lewis, Tony and Sheriff, who go on a vacation to Malaysia , and are involved in drugs. Two of them, Tony and Sheriff come back to New York.. while Lewis stays back, and gets arrested. He is scheduled to be hanged within 8 days, lest his other 2 friends come back. If only one returns, each one will have to serve six years in prison. If both return, all three will have to serve 3 years each in prison. If none return, he'll be hanged.
Tony and Sheriff are in a dilemma. Tony is about to tie the knot with his fiancee and has a bright future ahead of him, and Sheriff does some soul searching..and decides its not within him to go, but eventually his conscience pricks him and he ends up going to Malaysia and so does Tony. 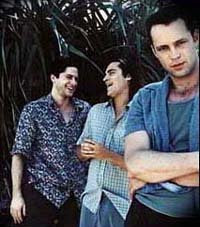 Tony comes back soon after he sees the conditions Lewis lives in, but Sheriff sticks around for saving his friend's life...
At the end, they still hang Lewis cuz some American journalist criticises the Malaysian rules of justice, which offends the Malaysian judiciary.  :(
This movie leaves you thinking what would you do had u been in Tony's or Sherff's shoes..
The right thing to do would be to go back to Malaysia, because you're responsible too. But that also means wasting 3/6 years of your life in a prison where each one has a separate cell, there's no proper food, and you're made to slog..
Sheriff does say.. "Its really difficult to give an honest answer unless you're in the situation yourself.."
But.. i think if I were in their situation, I'd have first thought how much that friend means to me .. and if he/she would have done the same for me.. and would have then gone ahead wid my decision..
I'd like to know your take on this.. what would you have done ??
Posted by Anubha at 9/28/2008 07:17:00 PM

Well, like u said, i'd see what that friend means to me, but i won't think if he would do it for me... i'd do it for people who means something to me

Well, I would wonder why this guy decided to stay back knowing the risks .. I dunno if I would go back .. guess thats a warning for all those who call me their friend :)

Sheriff is absolutely correct no one can comment on this unless u r in his shoes. There is no question of frienship here. What matters is you are as guilty as the other fellow(be your friend or not) and responsible for his nearing death. Leaving him behind to die just for the sake of your life is insane thing to do but that is the most obvious thing a human will do. And to tell u , u always ( am mean ur attitude) expect from someone before u do ur deed. Its like tum kuch hamari madat karo toh ek din hum bhi madat karenege. Are u not being selfish. Even in last comment to your blog I ve mentioned stop expecting from ppl arnd.

its always easier said than done anubha!
it reali matters how close you are to that friend.. but if i m equally guilty and they make my partner-in-crime suffer on behalf of me and others, it is indeed wrong.. its a very tough call to whether lay back and be a silent spectator as ur accomplice bears the brunt of the common wrong doing or to stand up and have the balls to face the consequences...

God knows when will i be able to see the movie.. good review!

Do they hang people in Malaysia for doing drugs?

@avionic spanker
heheh he had some work there, i missed the first 5 minutes of da movie :D

@anonymous
Well yeah i did mention the right thing to do wud be to go cuz even u're responsible.. But as a human, u tend to think of all such things..well ya i do need to stop expecting :)

@ruchi
ya the right thing to do is to go cuz u're equally guilty, but anyone in real life wud think abt how close the person is, how much dat person means to u..

@sakhi
hehe thanks.. chk zee studio.. they keep airing it ..

@tallur
Ya, they do. Lewis had over 100gms of hashish , and its assumed that only a drug-dealer can possess that much.. and drug dealers are hanged. Atleast that's what they showed in da movie !! ;)
thanks for visiting my blog :)

Ummm..i would be in that situation, in the first place!

And if I am, I would definitely go back...and i'll pull the third person along too!!! ;)

@alphabetworld
me too!! was just a hypothetical scenario .. :)