Every night I tell myself I'll wake up early the next morning, so that I can go to work early, and come back home fast too (we just have to put in 9 hours somehow). I always aim at reaching office at 9, and end up going at 11 instead ! Getting up early is a difficult task :(
Today too, I had asked my mother to wake me up and she started yelling at me from 6.30 a.m. onwards.. Finally, after a lot of screaming and me hitting the "Snooze" button a good number of times (yes, I had set an alarm too!), I opened my eyes at 7, digging matter out of my eye, and thinking about what the rest of the day would be like.. Monday morning! I SOOOO wanted to go back to sleep and just then I saw that my dad was up too, thanks to my mother's screams in an effort to wake ME up!

I was all ready by 8.15 a.m., and left my house. It was pouring outside. I had a windcheater on, but carried my umbrella as well in order to not wet my bag, and walked to the station. The umbrella kept brushing people's faces
(courtesy my height-- i'm only 5 feet tall !!), it even struck a lady's eye which I realised after she cursed me in some language I can't make head or tail of ! My brother (who's almost 6 ft) later commented that umbrellas should be made illegal for people of my height! x( 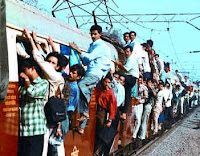 I finally made it to the platform, walked towards the ladies section, and waited for my friend as the public loo stinked badly. I had to let go of the 8.40 local as she wasn't there yet. I kept calling her as I couldn't take the stink anymore. She finally made it just in time for the 8.49 local. As if the platform stink wasnt enough, the entire ladies compartment was smelling of fish. Apparently, some fisherwomen had got into the Ladies' instead of the luggage compartment, and the train was so crowded we hardly managed to find a place to stand. Soon enough, as people kept alighting and boarding, it got even more crowded..
I thought I'd die of suffocation! After a lot of pushes and ladies fighting for a place to stand, we were pushed out of the train at Vile Parle station! We had to wait for the next train to arrive. I finally made it to Goregaon station, and took a bus from there to work. I reached office at 10. An hour late than what I had aimed at, but all in one piece atleast!
A bad start to the day. I hope the week ahead is not as bad.
Bye now, have to be up early tomorrow you see :P
Posted by Anubha at 6/29/2009 03:28:00 PM

I too had a bad start on monday. I was half hr late for work and whole day was hectic.

I guess you should have used your dialogue, "Dhakaa mara!!! Chal R.T.O." ha ha ha

Strangely i had the same experience on MONDAY.. :P
It was hectic ride and all the smells of sweat and unwashed hairs,loo stinking n pouring outside added to the flavour... Wow dat was so nice :|
hhehehhe
Everyone in my office had a bad start that day :)
Hope the whole week goes better :)

well well..... monday is supposed to be a dull day aftr a flamboyant sunday .... vaise u wrote well...esp the description of train scene....vaise fisherwomen are ladies too .... they can travel in ladies compt :p

nd its irritating to get up at early morning after too many snoozes nd everything....nice write ... :)

@Solitary Writer
Welcome to my blog :)
Yes I agree, mondays are indeed always dull. And yes, fisherwomen can travel in the ladies compartment, but usually if they're carrying their baskets with them, they're advised to travel in the luggage comp. :)

Train to Goregaon was so packed??? I commute Santacruz to Goregaon every morning - it's not that bad. Try first class if you're not doing that already. But I totally relate to the waking up conundrum. My mum's given up on waking me up :D

@j
Hi, welcome to my blog! :)
It's never that packed. I travel by second class and manage to get a window seat easily! Wonder why it was so crowded that day... :-s
I wonder when my mom will ever give up on waking ME up!!