Weekend in Ahmedabad - Part I

Just two weeks back, my blog friend Sakhi and I were on Gtalk as usual discussing plans for the weekend. None of us had any, and she randomly suggested I come over to Ahmedabad for a weekend! I first thought she had gone bonkers, but when she later added that it was just a matter of 8-10 hours, I considered the idea and got all pepped up! The next hour we were talking about where all we'd go once I got there and what all we'd do. I didn't give a thought to whether my parents would even send me there considering the farthest I've gone to all by myself is Panvel :D She offered to speak to them in case they had a problem with it, and so mustering a lot of courage, that night, I asked my dad over dinner if I could go. It was more like-- "I am going." That always seems to work better than "Can I go?" :D Anyway, he didn't say anything, neither yes nor no, and that always means "Yes". (I should probably write my next post on "dads & their lingo" :P) Mom had said yes already. The next morning I looked up for tickets and pinged my dad the train timings and schedule, and he readily agreed! I called up Sakhi immediately who was just as excited as me! :) I prepared a few chocolates for her that week, and on request, added ONLY raisins in them. Also got a book from Crossword that I thought she'd like ("Unaccustomed Earth" - Jhumpa Lahiri)
My train -- Karnavati Express, was scheduled to depart on Friday, 24th July, at 2:17 p.m. from Borivili Station. I took a half day off from work and went straight to the station. Waited, waited, and waited some more. I started getting worried when I asked this chap on the platform whether the train was to arrive there or on some other platform and he casually replied 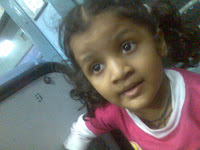 "Karnavati toh nikal gayi!!". It was when I asked a few more people that I deduced that the chap was a complete idiot. I had even got my coach number wrong, but luckily I managed to find my seat once I was in the train. I took out my novel and began to read it. Meanwhile, also made friends with this young girl here "Pankti", who was travelling with her mom to her grandmother's place for a wedding. Another lady seated on my left , supposedly named "Neha Shah" started making conversation with me, and when I mentioned I'm from Bombay, she didn't leave me alone one second. She asked me about what I do, where I work, what my parents do, how many siblings I have and then she went on to tell me her own family history so much so that I had to put down the novel I was reading and listen to her!! Apparently, she was a Rakhi Sawant fan and asked me if I follow her show "Rakhi ka Swayamvar" !!! Now you all can imagine what a character she was, and just when I thought I had managed to get away when I was was about to get off at Maninagar station, she asked for my number! I didn't have much of a choice there and had to give it to her and store hers too. 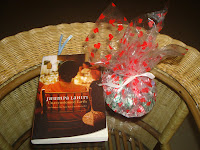 At the station, Sakhi, her husband Chirag, her daughter Isha and Isha's friend Rutwa had been waiting for me since an hour!!
After exchanging a few pleasantries at the station, we went on to have dinner and chatted on the way. None of us felt like we were meeting for the first
time and no one could tell we were ages apart too! After dinner, we headed to her house where I was to spend the night. I gave her the book and the chocolates, she said she had already read the book but would add it to her
collection nevertheless :) 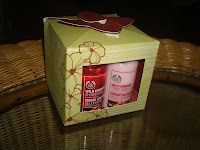 She too gifted me with a shower gel and body lotion pack. Isha was the cutest,
she gave me a chocolate and Chirag later mentioned she gives it to people she
really likes. I was happy! :) We retired to bed pretty soon since a long day awaited us ahead.
(To be continued... :D)
Posted by Anubha at 7/27/2009 10:29:00 PM

Sakhi...being nice, only gave you a subtle hint

This sounds great. I am surprised how seamlessly a virtual friendship gets translated into a real one !

good. its fun travelling in trains- u met new people for the first time in suddenly in no time it feels as if we know dem sins ages.. I make a lot of friends generally- and even more in the train- I din mean to say tht v get along with every single person on the train- it feels good but at the same time we dont like to be over indulgent in conversation specially if v r travelling alone- anywys.. gud tht U had a gr8 trip n it was a new experience for U....... tc God Bles U !!

waiting for the second part and better write some flowery words for me :P :P :D

See I told you, you should have got Monopoly :)~

@avdi
Welcome to my blog and thanks for visiting :)
And yes, it sure is suprising!
Most people find it hard to believe that you actually can meet good people on the internet and make friends with them but it's very much possible! :)

@Aravind
Hehehe yes.. we come across a lot of things while travelling alone, and hence I wanted to experience it! :) Wasn't quite looking forward to the "Rakhi Sawant" experience though!! :D :D
God Bless You Too! :)

@Sakhi
Bola tha na terko sab likh dungi!!
And yes sure wait for the 2nd part, will write about the breakfast you made :P

@Calvin
Yes next time I'll listen to you!! :P

Conversations with fellow passengers in train can really be interesting! :)