The next day, i.e. on Friday, the 25th of July, we were all up by 9 making plans for the day. Sakhi had prepared breakfast for all of us-- some dish called "rosti" made of grated potato and cheese, and when Chirag added that she keeps experimenting on guinea pigs like them, I was a little hesitant to taste that thing! I said my prayers before I could take a bite, and it turned out to be so YUM that I took another helping of it!! :)
We got ready and first went to Isha's school for a PTA meeting. I set my foot into a school after ages and suddenly, I started feeling like I was so old! Toddlers ran past me playing amongst themselves, and I could see a couple of ladies in their late twenties hurrying up to make it in time for the meeting, and oddly, I felt like I had missed out on my years back then.. it was a strange, strange feeling. 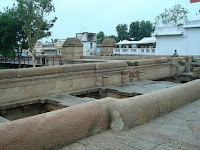 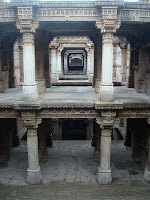 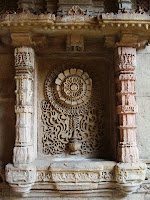 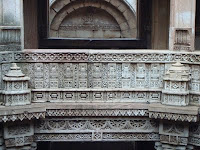 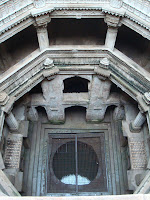 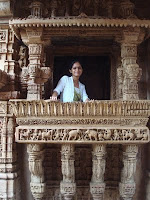 Anyway, once it got over we went to my first "sight-seeing" spot - "Adalaj Step Well"
Frankly, when I looked at it, I thought it was a piece of crap, all I could see was a temple and a few pillars jutting out but I trusted Sakhi enough to know she wouldn't take me some place just for the heck of it and kept mum. And I'm glad I did! As we stepped inside, I just kept on looking in awe ! The place is a marvel !! The step well is actually 60 feet down ( 7 storeys below), they've made steps to climb up and down, and carved all over. The carvings were so intricate and so beautiful, each a different one...we didn't keep our camera in one second! We then headed for lunch at Havmor and I spotted a camel on the way!! I don't get to see many of them here; my excitement puzzled Sakhi :D 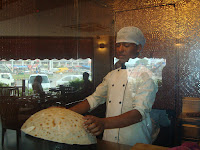 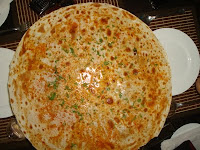 Lunch was delicious : Karaari Rumali Roti and Cholle Bature followed by Sweet Lassi and Cold Coffee. I fell in love with that Karaari Rumali Roti,it was crispy with ghee and masala in it; my mouth waters each time I look at this snap! 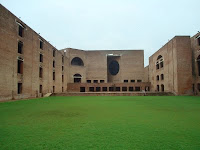 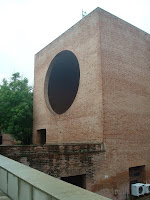 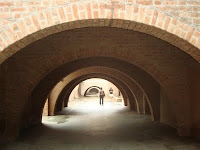 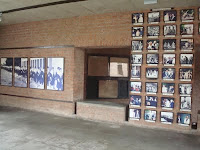 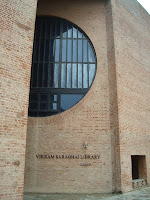 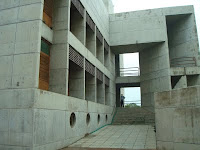 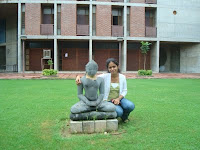 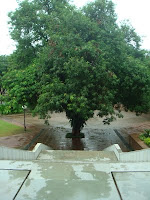 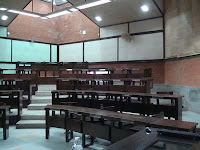 Post lunch we went to IIM-A
One of my friends Nissim studies there, I was supposed to meet him and he had offered to take us around the campus- both the old and the new. The campus was nothing like I had imagined it to be, it was even more beautiful ! I have seen nothing so serene and heavenly. I felt like I had come to a whole new country :D It's full of trees, and he said we had come at a good time, it had just rained and made the place a lot more greener!:) The classrooms and the dorms are huge (everything is huge basically), and there are huge circular openings on each building for the light to come in. The library is amazing. And there's a 132 feet gallery connecting the old campus to the new one.The new campus is just like the old one, except that the in the old one, the buildings have a natural aura because of the bricks that have been kept unplastered or painted, while in the new one, the buildings have a sleek grey (concrete) look. The circular windows are also relatively small in the new one. We had a cup of tea in their canteen "TANSTAAFL" which stands for "There Ain't No Such Thing As A Free Lunch", one of their professors came up with the name! :D 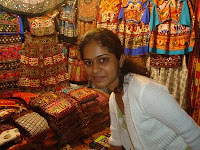 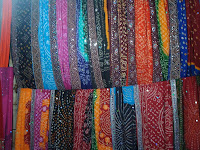 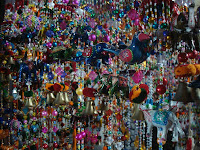 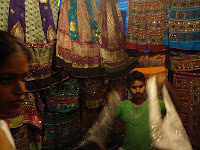 Next, we went to Law Garden for some shopping. They have legal stalls lined up there for the tourists. It's worth visiting even if you don't really want to shop. The place is vibrant with colours and mirrors reflecting the lights of these stalls! There was a huge variety of chaniya cholis, dupattas, embroidered hand bags, mobile pouches, junk jewellery, bangles. I bought 2 hand bags, one with "Kutchi work" on it, a small purse, a dupatta for mom and 6 embroidered mobile pouches for my dear ones! 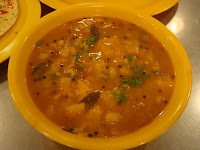 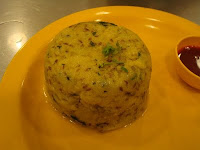 We then stopped for dinner at Swati's, this time Sakhi ordered for me. She wanted me to taste typical Gujarati food and so, we had khichu and dal-dhokli. I liked khichu!
It was time to go back home and start packing again. I was to leave the next day (Sunday, the 26th of July). I felt like waiting a day longer but didn't really have a choice there. 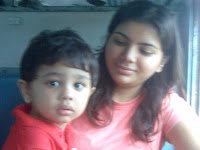 Sakhi came to see me off the next day, I gave her a big hug and boarded the train (Gujarat Express) at 7 am.
My journey back home wasn't good at all. I enjoyed an hour with Kayan who just kept staring and smiling
at me but soon, the compartment was occupied by too many people with no sense of hygiene at all ! I tried my level best to ignore them; my novel and my cellphone (Twitter) kept me company all throughout, even managed to catch a few winks and soon it was 4pm.. The train halted at Dadar station; It was pouring...classic Bombay! ;)
Posted by Anubha at 7/30/2009 05:28:00 PM

cool.. nicely written.. best part of this post is the pics along which take me along the journey..

One of my friends is also fond of cooking & experimenting & her hubby complains (jokingly) that he gets to be the guinea pig! But she's an excellent cook, nevertheless! :) I guess hubbies are the obvious guinea pigs for ladies who wanna experiment with cooking & if the gal is unmarried then its the fathers who become guinea pigs! ;)

Waiting to go to Ahmedabad!! :)

The campus of IIM-A is awesome !!!

I have some relatives in Ahmedabad, so maybe i will visit. :)

The shopping sounds awesome. I dont like dal-dhokli either. I like rasiya-dhokla. That is some kind of chawal-pakoda in a kadi like thing.s YUM. You should have brought back some gorkeri ka achar.

You are truly a very lucky person!

@amit
Hehehe.. For my mom, my brother is the default guinea pig. Now that he is away, I'm the unfortunate one :(

@avdi
Hmm, I haven't heard of rasiya-dhokla or gorkeri ka achar.
I wanted to bring back Busa (chivda) from Ahmedabad; my office colleague who's from Ahmedabad had got it once and I had liked it. I forgot to get it, but my college friend got it for me later! :)
Will surely try Gorkeri ka achar next time! :)
And thanks for the compliments..!
Visited your blogs, was impressed! :)

@Tallur
Lucky? In what sense??

To have such good friends and friendships to cherish!

Good to know that u liked my city :) BTW, do u know that u have actually discovered more abt Ahmedabad than I do? lol Hope u come back someday

@JD
Haahaa! :D
You know, one of my colleagues who stays in Ahmedabad said the same thing!!! :D :D
Funny how we never really roam around in the city we live in, but want to see every corner of the ones we visit! :D
(I am an exception though, I LOVE BOMBAY and been to every part of it! Atleast all places that I know of :D)

Hey! Lovely narration! I too am from mumbai (currently living overseas tho) and want to visit ahmedabad (law garden in particular) for some hard core garba shopping!! hehehe....8 hrs by train doesnt sound like too much at all! My family is originally from malvan, and thats an 8 hr ride from mumbai too...so on that basis will have to convince my family to visit ahmedabad the next time i am in india!! hehe! Enjoyed your photos!

@Gauri
Hehe. Thanks and welcome to my blog! :)
I too want to go there one more time. Missed a lot of places like Sabarmati Ashram, and the other side of Ahmedabad (old Ahmedabad). Might go there in the near future!! Hope you get to visit as well! :) Have fun! ;)