It's that time of the year again and unlike last time, the tension's building up, which is good- it's making me study if nothing else!
I'm really tensed this time around though, and I've stopped indulging in unfair  practices long since I had made a fool of myself a couple of times! :D
This one time, in my first year of degree college or so, I had an "invisible" pen. The pen was visible but what you wrote with it wasn't. You could write with it on a blank piece of paper and all that you've written would be visible only once you flash some light on it by switching on a button that was right on the lid of the pen. After mugging up some formulae, I still wasn't confident of remembering all of those and wrote them on a blank paper with that magical pen "just in case". I folded it and kept it in my pencil box. The next day, I carried the paper with me in the examination hall and I was prepared to tell whoever asked that it was for rough work!! Right after I got my question paper, I opened that folded sheet of paper and switched on the little button on my magical pen. And the light just wouldn't come on!! The battery had run out! I felt so silly I didn't know whether to laugh or to panic :D Thankfully, I could recall all those formulae when I needed to and could do without that sheet of paper! 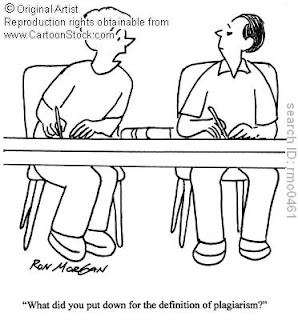 There was another instance where we had all decided that whoever gets the answers to all the objectives would text them to everyone else. Five minutes into the exam, all of our cell phones vibrated and we looked at each other in bewilderment wondering how someone got them all so fast. It was only when we read the message that we realised it was from Vodafone! :D I laughed and continued attempting everything else. At the end of it, I couldn't get two of the objectives. I had my friend sitting just in the next row in the same line as me such that we were adjacent to each other but were at two arms distance. I thought of asking her but didn't know how to. Finally, something struck me- I wrote those two question numbers on an eraser with a pencil and decided to pass it on to her.  I asked the supervisor if I could give it to her (Yes! Pretending to be TOO honest and all that! :D) and she allowed me to. That friend of mine took it and kept it on her desk, too busy to realise that she hadn't asked for it and that it meant she had to figure out why I passed it on. I smiled at myself, amused, and that's when she realised what she had done and burst out laughing having made a fool of me without realising it! I couldn't help but join her and the supervisor caught us laughing and asked us to share the joke. We apologised saying it was nothing and continued to write silently. She didn't know the answers to those questions as well, so in the end, we just left them, submitted our answer sheets and left the hall laughing like crazy!
So, I've never really managed to "copy"! :D Luck is never in my favour when I try  something like that so I left those practices long back and I got through all of those exams anyway.
Trying to study this time again and hope to pass without having to attempt any of those stunts.. wish me luck! :)
Posted by Anubha at 4/18/2010 10:46:00 PM

Hehe, the one with the invisible pen was hilarious. :-D

Btw, I'm wondering how come I din't know about the Vodafone waala incident. When did that happen?

i remember u telling me the vodaphone wala incident!

Good one... All the best for your next Copying adventure.. :)

Yup I know about this pen..one of colleagues had caught a student once.

For some ppl, copying is such a great effort while for others its a breeze. You and I fall in the first category. I cant even look at others while writing my exam.

Hey i remember you narrating me that invisible pen waala incident..It was damn hilarious :)

@JD Yeh toh bahot puraana avishkaar hai. It was trending a lot back then though! :) And thanks! ;)

@aditipatel04
I guess you were in the other classroom for exams that time (I was in 108). This was somewhere in FY or SYBSc. Anyway, thanks and wish you the same! :)

@Rohan
Which hopefully won't happen.. but thanks a lot anyway! :D And welcome to my blog! :)

@Reema
Hmm.. Thank God none of my supervisors knew what it was! :D It wasn't working anyway!

@Harsh
Haahaa.. It's available in Hallmark or Archies! Go get it! ;)

@UmaS
Welcome to my blog! :)
And yes, for people like us, even attempting to look into someone else's paper would get us in trouble. We just can't keep a straight face and get away with it easily!

Stumbled on your blog. This pen sounds like quite an avishkaar. But best of luck! Reg the 'fairer' sex piece- woemn empowerement is growing. Not in huge ways but small steps. Microfinance institutions give money to woemn Self help groups...

@Bhavna
Hey welcome to my blog! :)
The pen was definitely trending around that time.. nice aavishkar it was for collegians! :D
Hmm, and money is not the answer. Equality is what we strive for- which won't come through reservations but through a social reform.

haha..Brilliant it is like recalling the old school times. It is my first visit on ur blog...encountered a good read!

well you know the old phrase "desperate moments, desperate measures" whe you are between the wall and sword, you have to find a quick solution to that problem.