Don't remember when I reviewed a movie last.. but this particular movie deserved a review -- not because it is worth a watch. In fact, I wouldn't really recommend it unless you're a film critic. But just because it left us feeling doomed. Like we didn't know what happened in those two & a half hours! (Thank God movies aren't 3 hours long anymore..) This review will not tell you how the movie is or how I rate it. This should not be taken as a base for whether you should watch the movie. Perhaps you'd like reading it better after you come back from watching it.

So here's my take on Raanjhanaa.

The first half of the movie is mostly about Kundan Shankar (Dhanush) pining for the unattainable Zoya (Sonam Kapoor).  I found this to be a sort of a power play where Kundan gives Zoya power over him by loving her even though she does not feel the same. Zoya uses this power without fully realising it. Love, when obsessive, can be destructive. The audience naturally sympathises with Kundan because "all is fair in love & war". Well, it's not. There are a lot of questionable/objectionable scenes in the movie such as Kundan threatening Zoya that he'd slash his veins if she does not claim her love for him. And the one where he almost harms her, driving her into a river and leaving her in the waters alone when he finds out that she loves someone else (Abhay Deol). After which he slashes his veins again, by the way. The scene also made for a movie poster : 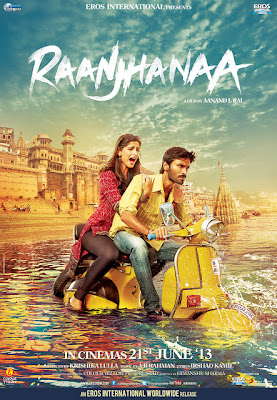 The first half also includes scenes where Bindiya, Kundan's best friend is handled roughly. Kundan is Bindiya's childhood love and yet he makes her do things she doesn't entirely approve of but later feels happy about.. because it makes Kundan happy.

I think all the women in the movie are handled roughly by the lead men in the movie at some point or the other in an acceptable manner. So it feels like an irony when we learn that Zoya's lover (Abhay Deol) is an activist who fights for social causes.

The second half of the movie is mostly about revenge & violence. It's about Kundan taking revenge on Zoya, then paying for it by being involved with her activities & work and oh yes, Zoya slashing her veins, she feeling jealous of Kundan's growth, her taking revenge over Kundan.

There is enough proof of this on social networking websites with status messages like "Finally a true love story!". People who strongly feel this way should introspect.. Because such movies make you work less on yourself and treat your behaviour to be acceptable (just because it is out of "love"). But, this isn't love. Love is wanting to see the other person happy even if it means sometimes curbing your emotions because you don't want the person to see they hurt you.. because that'd make them sad and you don't want that.

The good thing here is, Kundan realises that he wants to help Zoya, he wants to let her be happy. He wants to do the right thing so he helps her out by talking to her dad regarding getting Zoya married to her lover (Abhay Deol). But he fails when he reacts impulsively almost always (before doing the right thing) e.g. when he first hears about Zoya being in love with someone else, when he first learns that her lover is not a Muslim. It does happen so in life that you want to be strong & want to do the right thing but you push yourself so much to do it that you end up doing the wrong. In the movie though, he does the wrong every time. Rest of the time, it feels like he is paying up for what he did wrong. It's like a cycle.

Consequently, a lot of innocent lives get hurt / taken away in the end.

I feel they should have shown a small 'alternate reality' segment at the end of the movie.. something along the lines of the Butterfly effect.. just one segment at the end. Something like- "What would have happened if Kundan had just decided to be a friend & helped Zoya unite with her lover or decided to go his own way".

With regards to acting, I wouldn't say much about Sonam. It's cliche now to say that she doesn't act well. Sadly, it's true. She will make a great model perhaps but she isn't a very good actress. She may try working on it some more if she wants to make it. Abhay Deol has acted fairly well but not as good as he was in DevD or Oye Lucky Lucky Oye or Ek Chaalis ki Last Local. I feel his part didn't do justice to his acting potential. He is a good actor, otherwise. A lot is said about Dhanush's acting in the movie but I felt like he played the part well because it came naturally to him. He has a mediocre personality and he played the part of a mediocre Benarasi guy. Plus, he was shown to be the son of a Tamil priest. That covered up for his South Indian accent as well, in certain parts of the movie. So I don't see reason to glorify his acting in the movie. I found it average. 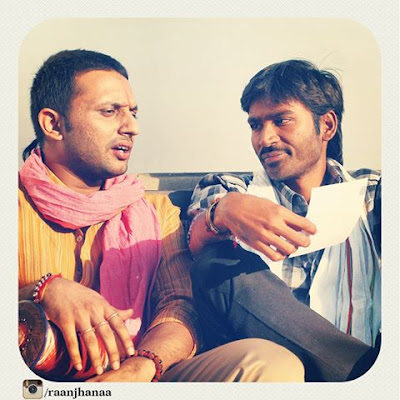 I like Kundan's friend Muraari's character in the movie. He's shown to be straightforward plus he always stands by him. Just as a good friend would. 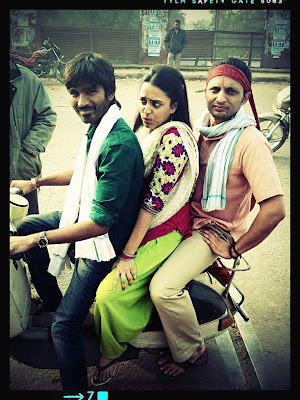 Bindiya is both innocent and strong. It is actually Zoya's character that is most confusing. They have shown it with respect to Kundan (how his love makes her manipulative) but not as an individual. They could have worked on that more.

The good tidbits : I like the Benaras backdrop of the movie. There is so much colour and tradition. A couple of the tracks are really good too. I was hooked to "Tum Tak" for a long time because of the variations in the song. The track takes me to Banganga waters in Walkeshwar (Mumbai) for some reason.. "Benarasiya" is also a pleasant track. Some of the dialogues are really funny/catchy like the one they show in the trailer: "Vitamin humse khaao aur aashiqui inse ladaao". I like the warm colours of the movie (in the first half i.e. Benaras).

Here's Tum Tak for you :

Keep the spark in the dialogues aside, and yes there are many occurrences in the movie that require introspection...
I had written abt Ranjhana on fb as soon as i returned home from cinema.. But received bashings from the ones who liked it.. Obviously thoda i presented in a rough way- chk out
https://www.facebook.com/pranav.sawant.549/posts/688703664491333

@Prank
Hmm, you did take it to an extreme. Also, I do not think Katrina speaks better Hindi than Dhanush does :P And that does not call for better/worse acting.

Anyway, it's true that there is a lot about the movie that isn't right. Sadly, it isn't perceived so by a lot others.

I liked your review until "mediocre personality". After that you lost me totally. This became a mediocre review. Not because you called Dhanush mediocre, but because you'd use that phrase to describe anyone at all. Made me think that you are not so deep after all.

@Anonymous
Hmm, I wouldn't use that phrase for just anyone at all. I honestly think he has an average personality. He does not carry that aura with him. Don't know how to explain. But that is how I felt and so I said it.