It was my first time clubbing (officially) today and never knew it could be soooo much fun!!! :)

The dance class I go to had arranged for a jam session where they'd play all kinds of music - jive, salsa, waltz, hiphop, techno, ballroom etc. We just had to let ourselves loose and dance. It was at Sheesha Sky Lounge, Andheri. And boy, it was fun!

As soon as we entered, our hands were stamped on... 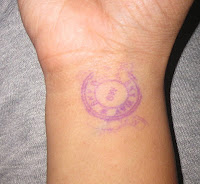 :P
There was slow music and people were doing the waltz.. After settling down a bit, we did some waltz too. Next, there were some hiphop numbers and some of the students & instructors were showing their b-boying moves. I was impressed. You too are going to enjoy these:

You should watch this one carefully from 0:49, you'd be amazed! :

Next was Jive and Salsa music.. After some dancing, I was waiting to jive with one of the instructors and luckily, I got to dance with Hari, one of my fav instructors :) He really knows how to take the lead. It was so much fun dancing with him.
After about an hour or so, we were back to freestyle, b-boying and hip-hop. 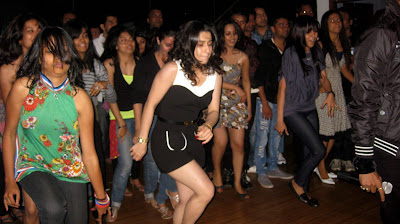 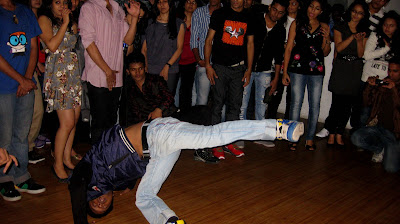 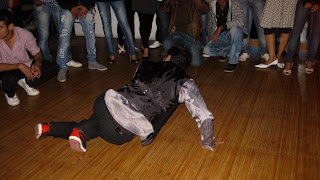 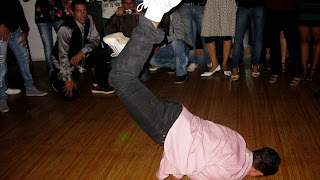 This one isn't so clear:


And here's my favourite instructor Hari :

That's Hari on the right (in black) and I don't know this pink shirt's name but he dances well !! :)

It was great fun. The place was a little expensive though. We were made to pay 400rs per head as entry fee and it did not include any drink or food. I was really thirsty and asked for water. They had only mineral water and that was priced at 100rs per bottle!!! Apart from that, it was a great place to dance.