After the long list of varieties of dosa (pav bhaaji dosa, czechuan dosa, pizza dosa) by Ayyappan (or that's what I think its name is) near Matunga phool galli (Matunga central), Reeti took me to another place in Matunga today that makes awesome Sevpuri Toast.

Now, "Sevpuri toast" doesn't make any sense when you first hear of it.. And frankly, I always imagined how it'd taste and wasn't quite happy the combo. I always wanted to try it though. After a long time, today, I finally got a chance to go there along with her, and I must say, the experience was simply awesome! The toast didn't feel like it didn't belong there at all.. The puris, tamarind chutney, masala being inside the slices of bread, the entire thing was toasted and served to us with sev, chutney and sauce! Everything blended so well that it left me savouring for more. Afraid I might have to skip dinner, I ordered for a jam toast instead of a samosa sandwich - another item that interested us. Maybe next time. 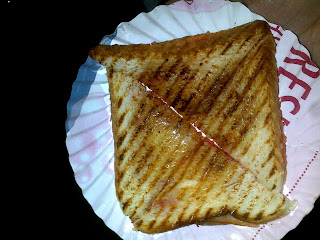 This is just Jam Toast.. Two slices of bread with jam spread on them, toasted together.. and loads of butter on top! Forgot to take a photo of the Sevpuri toast :(
Anyway, so next time you're in Matunga (central), make sure you go to Gupta Chaat Center (more commonly known as the guy who makes sevpuri toast :D). It's near West View (in the same lane). And this is the menu for you- 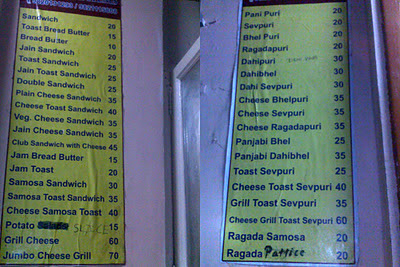 He has a whole list of such weird combos! Interesting, no?
Also, picked up a beautiful flower (fallen on the pavement) on my way home.. 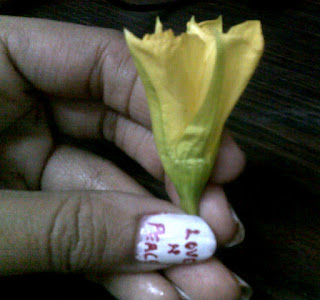